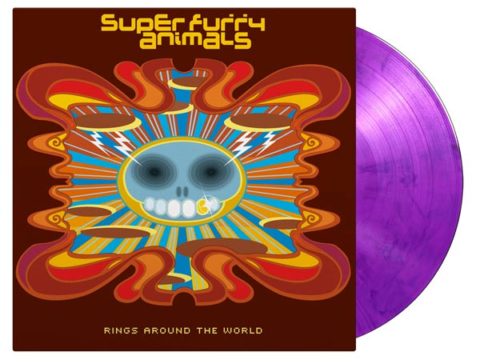 Super Furry Animals‘  2001 album Rings  Around  the  World is being reissued as a very limited 2LP coloured vinyl package with a bonus seven-inch single.

The Welsh band’s fifth album is an eclectic  record  incorporated  prog,  punk,  techno,  pop and death metal and features a number of guest musicians including Paul McCartney and John Cale.

This new gatefold vinyl package is pressed on pink/purple mix vinyl and comes with a four page booklet with lyrics/credits, a bonus seven-inch single (featuring a locked groove sample of ‘All The Shit U Do’ and is limited to just 1500 units, with less than half of that number allocated for the UK.

This set is being issued by Music On Vinyl and you can order a copy from the SDE shop using this link or the button below. This title is released on 14 December and that’s when any orders will ship.

SIDE A
1. Alternate Route To Vulcan Street
2. Sidewalk Serfer Girl
3. (Drawing) Rings Around The World

SIDE B
1. It’s Not The End Of The World?
2. Receptacle For The Respectable
3. (A) Touch Sensitive
4. Shoot Doris Day

SIDE C
1. Miniature
2. No Sympathy
3. Juxtapozed With U