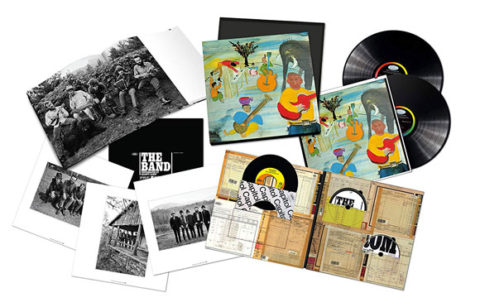 It wasn’t crystal clear when announced, but fans considering the forthcoming The Band Music From Big Pink box set might like to know that the 5.1 surround mix included on the blu-ray audio (which is exclusive to the box) is a BRAND NEW MIX and not simply the old 5.1 mix from the DVD-Audio, re-presented.

The previous surround mix was created by Don Gillert, for the 2003 DVD-A, but Bob Clearmountain has produced a new 5.1 surround mix of Music From Big Pink – and the six bonus tracks! Clearmountain knows what he is doing in the surround domain, he created the acclaimed 30th anniversary 5.1 mixes for Bob Marley & The Wailers‘ Legend blu-ray audio back in 2014.

While we’re on the subject of the box set, as suspected, the double vinyl edition of the album included is a 45RPM pressing. As well as the CD, blu-ray, and two vinyl records, this box set includes an exclusive reproduction of The Band’s 1968 seven-inch vinyl single of The Weight / I Shall Be Released (using the new stereo mixes) and a hardbound book with notes by David Fricke.

Tracklist above in new 5.1 surround mix + 96kHz/24bit high resolution stereo (both exclusive to the box set)