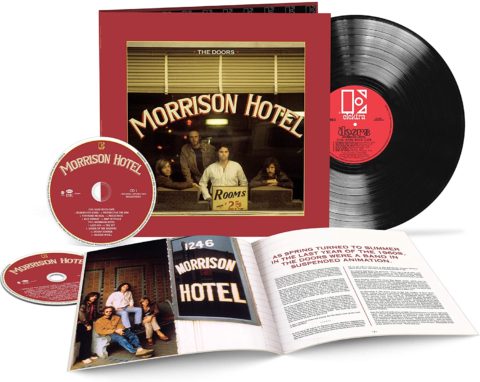 2CD+LP deluxe set • Over an hour of unreleased sessions

The Doors fifth studio album, Morrison Hotel, will be reissued in October for its 50th anniversary.

The album was recorded in late 1969/early 1970 and released in February 1970. It’s newly remastered for this release by Bruce Botnick and this version is included on CD and as 180g vinyl record.

The goodies are all on the bonus CD with more than an hour of unreleased recordings taken from the sessions for Morrison Hotel.

Botnick says: “There are many takes, different arrangements, false starts, and insightful studio conversations between the band – who were in the studio – and producer Paul Rothchild – who was in the control room. It’s like being a fly on the wall.”

The outtakes include rough versions of Morrison Hotel tracks ‘Peace Frog’ and ‘Blue Sunday’ as well as The Doors rarity ‘I Will Never Be Untrue.’ The bonus CD also features the band jamming on cover versions of the Motown classic ‘Money (That’s What I Want)’ and B.B. King’s’ ‘Rock Me’.

David Fricke writes the sleeve notes and as you can see from the image this is packaged like the The Doors/Waiting For The Sun and Soft Parade deluxe editions.

This anniversary set is released on what is becoming reissue ‘judgement day’ – 9 October 2020!

Disc One (CD) : The Original Album

Black Dressed In Leather (Queen Of The Highway Sessions)

Side One: Hard Rock Cafe