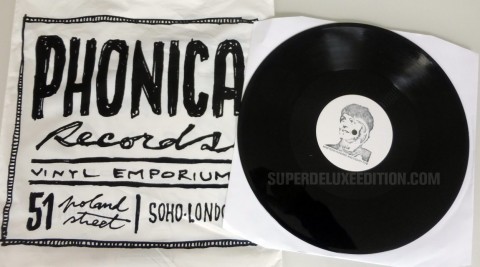 Remember the ‘mysterious’ white label SDE told you about at the end of March, that offered two remixes of Paul McCartney‘s Band on the Run album track Nineteen Hundred and Eighty-Five? The full story behind how this came about and who was responsible for it, has been revealed…

As reported on Billboard, it turns out that German DJ/remixer Timo Maas and Canadian producer James Teej were responsible for the release, with Maas having done some work on the Macca multi-tracks as far back as 2009. The German wasn’t really satisfied with his work at that time: “we never fully succeeded in working the parts to a point where I really felt the end result was worth passing along,” he told Billboard, and so the music lay dormant on his computer until last year, when James Teej came to visit and heard it.

Enthused, the pair then set back to work on creating the two remixes. They were sent to Paul McCartney who gave them his seal of approval.

“We secretly sneaked it into two vinyl stores in the UK and Germany in order to test the waters and understand how people would react to the music on face value. The response was a little hard to believe,” says Maas, adding, “Phonica’s London store’s phone was ringing off the hook like crazy for copies, and it went to No. 1 on their charts overnight. All of that got picked up first by i-D magazine, and made it all the way to the UK tabloids who speculated that Kanye West might be behind it.”

SDE would like to interject at this point and say that we had this story five days before i-D thank-you-very-much. Anyway, it’s certainly interesting to learn how this came about; especially to note the fact that it wasn’t MPL who put out the white label, rather Maas and his management.

Read the full interview over at Billboard.com.