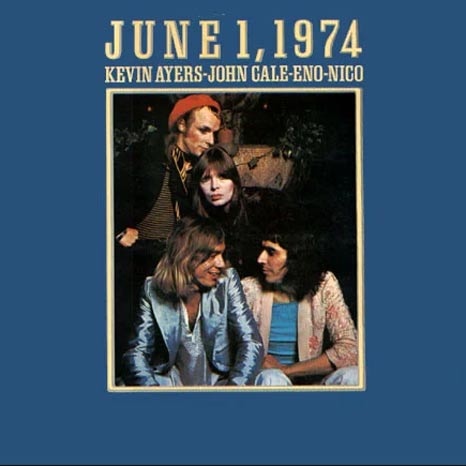 The classic live album June 1, 1974 will be reissued in a highly limited 180g black vinyl pressing in November.

The album documents a concert (performed at the Rainbow Theatre on the date in question) organised by Island Records’ A&R Richard Williams. The idea was that a reunion of these Island artists would help to generate interest in the label (which was primarily associated with reggae at that time).

Brian Eno performs two songs from his debut solo album Here Come the Warm Jets (1973), while Nico delivers a rendition of The Doors ‘The End’. John Cale performs an  “alarming take” on Elvis Presley’s Heartbreak Hotel, while Kevin Ayers‘ performances fill up side of the album. The backing band was incredible and included the likes of Robert Wyatt and Mike Oldfield.

This vinyl pressing is limited to 1000 worldwide with only 200 allocated for the UK. It will be released on 2 November 2018.  The SDE shop has a limited quantity available for worldwide shipping.