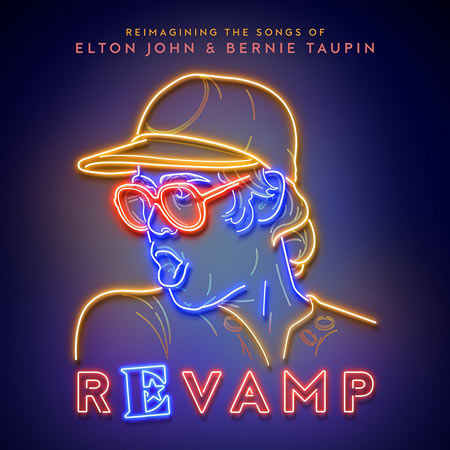 In 1991 Mercury records released Two Rooms a celebration of the songwriting skills of Elton John and Bernie Taupin. Over  quarter of a century later, the concept has been dusted down and updated for Revamp, a similar album with contemporary artists paying tribute to talents of Messrs John and Taupin.

Elton loves a collaboration or the validation of young, ‘hip’ artists covering his work – the bonus disc on the reissue of Goodbye Yellow Brick Road proved that – and Revamp sees acts like Ed Sheeran , Florence + The Machine, Lady Gaga, Mumford and Sons, The Killers and Miley Cyrus doffing their cap in the direction of the two songwriters.

Despite the considerable bonus of Kate Bush performing Rocket Man, looking back on it, Two Rooms reeks of late eighties corporate rock, with its line-up of The Who, Tina Turner, Eric Clapton, Phil Collins, Sting et al, although on further reflection Revamp is also packed arena-filling, million-selling artists, so is it really that different, after all?

As if this is not enough, Revamp also has its own demographic-widening companion album: a “Nashville influenced” album Restoration, featuring Elton’s songs reinterpreted by Country music artists, including Rosanne Cash, Emmylou Harris, Miley Cyrus (different song) and Willie Nelson. What next, a Grime edition?

Elton makes a point of thanking all those involved “It’s always a huge compliment when an artist loves your song enough to take the time and effort to rework it,” he says, as if everyone did this without any encouragement – financial or otherwise – from record labels, managers and the like.

Revamp (and Restoration) will be released on 6 April 2018.

Restoration: The Songs Of Elton John And Bernie Taupin