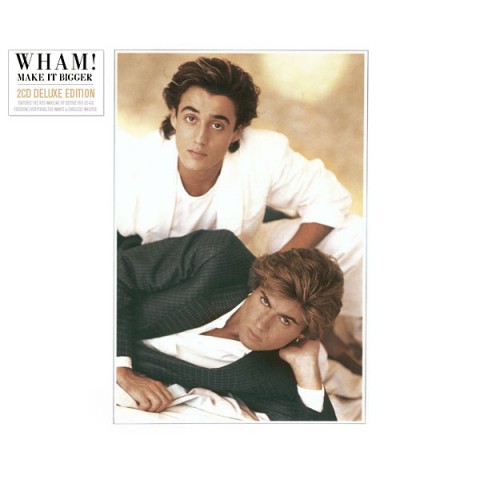 George Michael and Andrew Ridgeley have announced that they will come together 30 years after splitting up Wham! to promote Make It Bigger, an expanded reissue of the band’s 1984 studio album due later this year

The pair ruled the pop airwaves in 1984 with a series of smash hits taken from Make It Big, including Wake Me Up Before You Go-Go, Freedom and Everything She Wants. To date Make It Big has sold nearly 10m copies worldwide. George and Andrew eventually called it a day with The Final Concert at Wembley Stadium in June 1986, just as they chalked up another number on single in the UK with The Edge of Heaven.

Full details of the Make It Bigger reissue have yet to be announced, but the unreleased-on-CD ‘Special Version’ of Careless Whisper (aka the Jerry Wexler Mix) has been confirmed as appearing on the bonus disc along with a previously unreleased seven-minute instrumental guitar demo written by Ridgeley. A source close to the duo told SDE that including a Ridgeley solo composition was “key” to persuading him step back into the public eye and help promote Make It Bigger.

Other bonus content will include the Long Version of Freedom, the Pudding Mix of Last Christmas (the festive number wasn’t on the original album, of course), and all the instrumentals issued at the time (largely used as B-sides). In total, three versions extra of Everything She Wants will feature on the deluxe including Everyting She Want (the much-bootlegged ‘Jamaican Mix’) and a reworking of the 1997 version from The Best of Wham: If You Were There compilation, called Everything She Wants 97 16.

The ‘Special Version’ of Careless Whisper will see its CD debut on Make It Bigger.

Perhaps the most anticipated track on Make It Bigger will be the previously unheard outtake (I’m) Super Hard, Lady. This infamous ‘X-rated’ number was confined to the vaults on the insistence of manager Simon Napier-Bell after he heard the demo and called it “vulgar” (George later reworked it as Credit Card Baby).

As well as the two-CD set, a Make It Bigger deluxe box will be issued which will include both CDs, a DVD of promo videos (plus the Foreign Skies film), a shuttlecock, a ‘Choose Life’ T-shirt, a teeth whitening kit and a 64-page hardcover photo book: I Know You’re Not A Fool: Wham! in ’84.

George Michael and Andrew Ridgeley are expected to support the reissue with a committed media campaign. Appearances on top tier UK TV shows are promised, including Loose Women and Sunday Brunch. Broadcaster Nick Knowles also let slip recently that he had filmed an episode of his BBC show DIY SOS at Ridgeley’s home in Cornwall, which is due to be broadcast in October.

Make It Bigger is expected later this year.