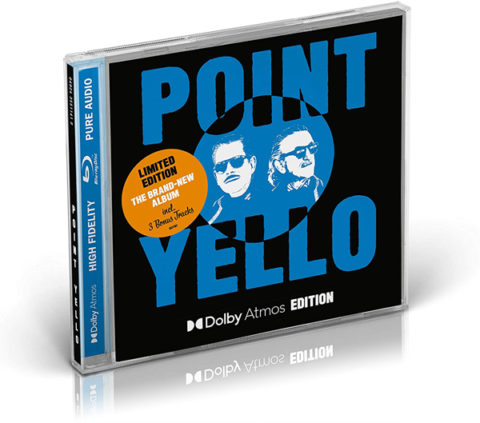 The latest album from Swiss electronic duo Yello has been issued as a standalone blu-ray edition, featuring a Dolby Atmos surround mix of the entire album and three bonus tracks.

Point was issued back in August and great though the now sold out box set version was, it didn’t contain a surround mix of the album. But fans can now get hold of this via a new standalone blu-ray with a Dolby Atmos Mix of the album. Interesting to see that the ‘Pure Audio – High Fidelity’ brand has been exhumed  for this release!

This edition appears to have a 24/96 hi-res LPCM stereo mix and the Dolby Atmos mix. There are three bonus tracks but it’s not entirely clear what they are at this stage.

There’s no separate 5.1 mix, although, in theory, it shouldn’t matter and an Dolby Atmos mix should ‘downmix’ to standard 5.1, but it has to be said that artists like The Beatles and Steven Wilson have recently offered both with their blu-rays and have not left the Atmos Mix to do two jobs.

Nevertheless, the standalone blu-ray audio with surround mix is a relatively rare beast these days, so this release is certainly welcome. The Dolby Atmos blu-ray of Point is out now.