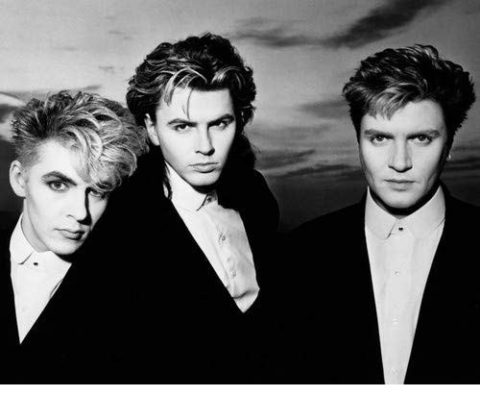 In a new feature, SDE curates a playlist from a popular artist. This inaugural collection of tracks digs beneath the surface of Duran Duran‘s output, ignoring virtually everything on their current concert set lists (and best ofs like 1989’s Decade or 1998’s Greatest) and instead digs deep into their catalogue for a hit-free selection, spotlighting high quality album tracks, B-sides and a few should-have-been-singles!

For some discipline, the self-imposed rule is that the playlist should, in theory, be burnable onto a CD, so the maximum running time is limited to 80 minutes. I’ve also put some effort into the running order, so while by all means go ahead and shuffle, you might get more enjoyment out of playing it as it is (at least for the first time!).

This has of course been done on Spotify. Don’t take that as any indication that SDE is no longer about ‘Holding The Music In Your Hands’, it’s just that this is by far the most practical way to share this amongst SDE readers. As if to highlight the limitations of streaming music, three Duran Duran albums were unavailable: Medazzaland, Pop Trash and Astronaut. If they had been, then perhaps space would have been found for ‘Midnight Sun’, ‘Starting To Remember’ and ‘Finest Hour’.

If you’re a Spotify user and like this, then I’d encourage you to ‘follow’ the playlist. You can start listening below, and scroll down further for details on the track selections.

Anyone Out There
The third song on Duran Duran’s self-titled debut album from 1981. ‘Anyone Out There’ very much defines the band’s early sound with minimalistic synths, Andy Taylor’s distinctive guitar figures, and some quite funky bass from John.

Serious
The second single from 1990’s Liberty was nothing short of a disaster for Duran Duran. It was their first 45 not to reach the top 40 in the UK, peaking at number 48. I don’t remember this being promoted very much at all and it felt at the time that EMI had all but given up on the band. There was no third single from the album, no tour and it was probably only the promise of a new song called ‘Ordinary World’ that stopped them from being dropped.

Hold Me
This album track from the Nile Rodgers-produced Notorious (1986) is a rocky fast-paced number. The break section at 2.52. is fantastic.

Liberty
The title track from Liberty, is a great mid-paced dance number and one of the better tracks on the record. If EMI had stuck with the album this probably would have been the third single. The pre-chorus break is quite Big Thing-ish. Great guitar work from Warren Cuccurullo at the 3.05 point.

Love Voodoo
So much to enjoy from Duran Duran’s ‘comeback’ album, The Wedding Album, including this slinky, dubby album track. Great descending chord progression in the verses and wonderful melody from Simon, with a very strong chorus. It just sounds so good.

Only In Dreams
I hesitated over this inclusion from 2015’s Paper Gods. Did it really deserve a seat at the table? Well, I thought this was the best track on the album at the time and stand by that opinion. Although it’s in dire need of editing (six minutes, really?) it sounds the most like ‘Duran Duran’ of anything on the record and could easily have been on Notorious, in a different life. There is some dross on Paper Gods but this song seems rooted to some kind of reality.

So Misled
Talking of Notorious, ‘So Misled’ has always been a wonderful highlight for me. Brilliant rhythm track, great arrangement; those horns. Classic post-hysteria Duran.

None of the Above
One of my favourite Duran Duran songs, period. This is from The Wedding Album and just incessantly delivers great melody and wonderful bits of arrangement. The band aren’t trying to sound ‘contemporary’, just like themselves. The production is spot on. The 12-inch ‘Drizabone Mix’ (it was a single in Japan) is disappointing.

I Believe / All I Need To Know (Medley)
Duran Duran’s best B-side is this medley from the ‘All She Wants’ Is single, which was the second 45 from 1988’s Big Thing. How could they write something as good as this and then two years later struggle so badly with Liberty?

A Matter of Feeling
Lovely ballad from Notorious. Very mature and some great lyrics from Simon.

My Antarctica
THE best song from Liberty by a country mile. The executives at EMI must have had cotton wool in their ears not to have recognised that this could have been a classic in the vein of ‘Save A Prayer’. They were probably scared to release a ‘slow’ song as a lead single, but to choose The Violence of Summer over this was madness. An instrumental variation of ‘My Antarctica’, called ‘Throb’, was actually the B-side to that single, just to rub salt in the wound. The band haven’t even recognised the quality – they never play it. Brilliant lyric from Simon.

Khanada
Back to 1982 for the B-side to ‘Careless Memories’, the single that momentarily worried the band by peaking at a lowly number 37 in the UK (‘Girls on Film’ came to the rescue). The other track on the 12-inch was Duran’s cover of David Bowie‘s Fame.

To The Shore
Atmospheric number from the debut that was left off the original US version of the album, to make room for the Night Version of ‘Planet Earth’. When Capitol reissued the album after the success of Rio, it was still left off because they added ‘Is There Something I Should Know?’ which was a non-album single in the UK.

The Chauffeur
This song never gets boring, but just in case, this is the impressive acoustic version that was the B-side to the ‘Rio’ single in the UK.

U.M.F.
This Tongue-in-cheek number from The Wedding Album (“making love to the ultimate mind”) shouldn’t work, but it’s just so much fun, really melodic and has a very creative arrangement (those parping horns are great).

The Krush Brothers LSD Edit
‘The Edge of America’ and ‘Lake Shore Driving’ close 1988’s Big Thing in a beautifully evocative and widescreen manner. For the Do You Believe In Shame? single this truncated version was created as a bonus track on some of the formats.

We Need You
The B-side to the ‘Skin Trade’ single (from Notorious) is winningly earnest with some ‘jazzy’ interludes where Nick Rhodes shows off his piano ‘skills’.

Do you agree with this selection? What would you add or remove? Leave a comment. Also which artist should SDE tackle next?