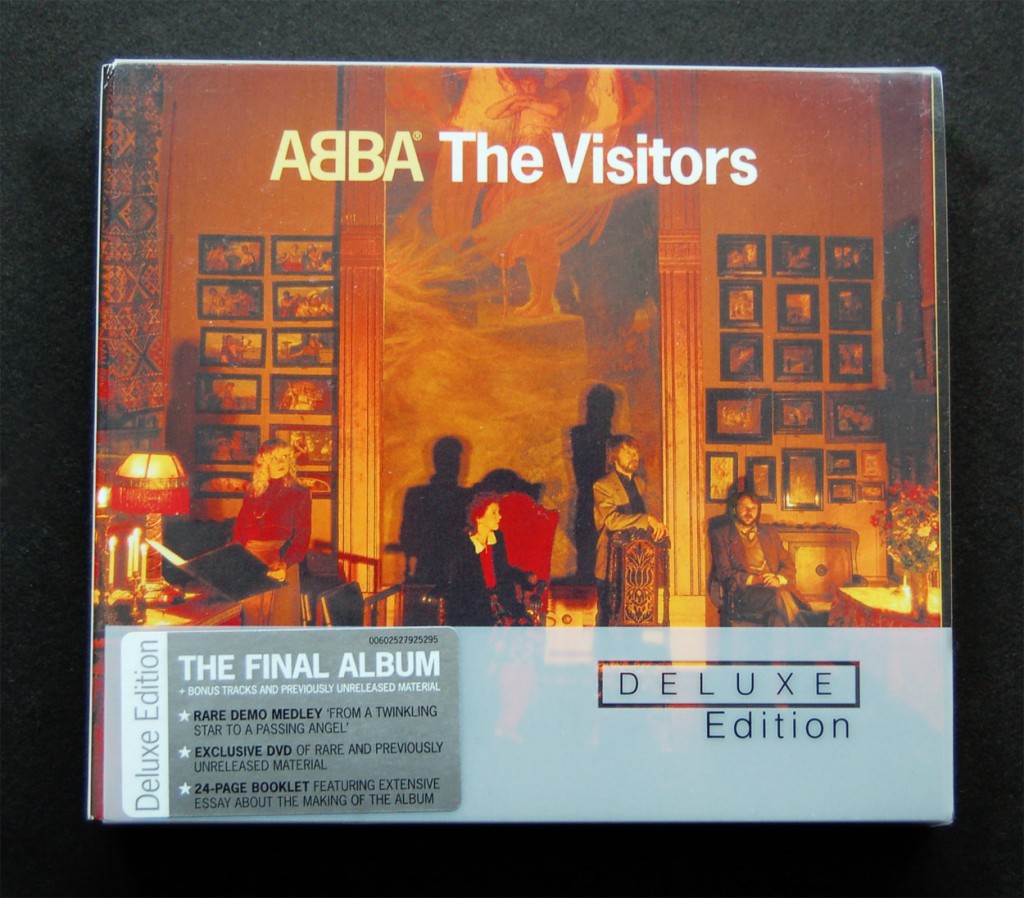 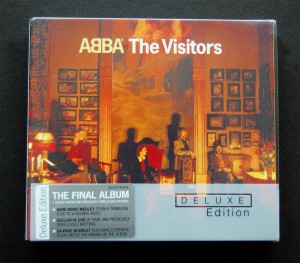 Any newcomer to ABBA’s final studio album – which is released this week as a deluxe CD+DVD edition – might be forgiven for thinking that they are listening to some kind of Kraftwerk/Vangelis hybrid as the title track starts, with its pulsing, ominous synths, Bladerunner twinkles, and processed vocals. But no, this is the same band that delivered Waterloo, I Do, I Do, I Do, I Do, I Do and Fernando only a few years earlier.

The Visitors – recorded during 1981 and released in late November that same year – sees a more serious, reflective Benny and Bjorn – still writing lyrics about lost love and broken relationships (When All Is Said And Done, One Of Us) but augmenting those songs with contemplative reflections on Cold War issues, and ponderings on the fate of dissidents in the then Soviet Union (The Visitors, Soldiers).

Although ABBA’s absolute finest hour is arguably contained within the joys of a seven-inch single (Dancing Queen or The Winner Takes It All), this is by far their best album.

The genius of this record is that not only is the songwriting absolutely top-notch, the production and arrangements are perfectly weighted – somehow being both experimental and commercial at the same time. One Of Us is the track that probably sounds most like ‘normal’ ABBA, and unsurprisingly, that was chosen as the first single, but the real joy lies elsewhere. The sheer ache and beauty of Slipping Through My Fingers is palpable, and the restraint in closer Like An Angel Passing Through My Room only enhances its mood of loneliness and melancholy – an extremely moving song.

Benny and Bjorn’s growing interest in musicals (they had a first meeting with Tim Rice in December 1981 to discuss what became Chess) is apparent on I Let The Music Speak, a song which has a very theatrical structure but manages to avoid bombast thanks to an elegant and subtle arrangement, and a fine Frida vocal.

The Visitors is ABBA’s masterpiece. Even if it wasn’t planned as their last album, in the end it was a fitting way to say goodbye. It surely deserves a place in any self-respecting record collection.

The album has been reissued before of course (notably in 2001), so let’s take a look at what different about this deluxe edition.

The remastering is superb. This a very quiet CD, MUCH quieter that the 2001 reissue and a joy to listen to. Audiophile quality. 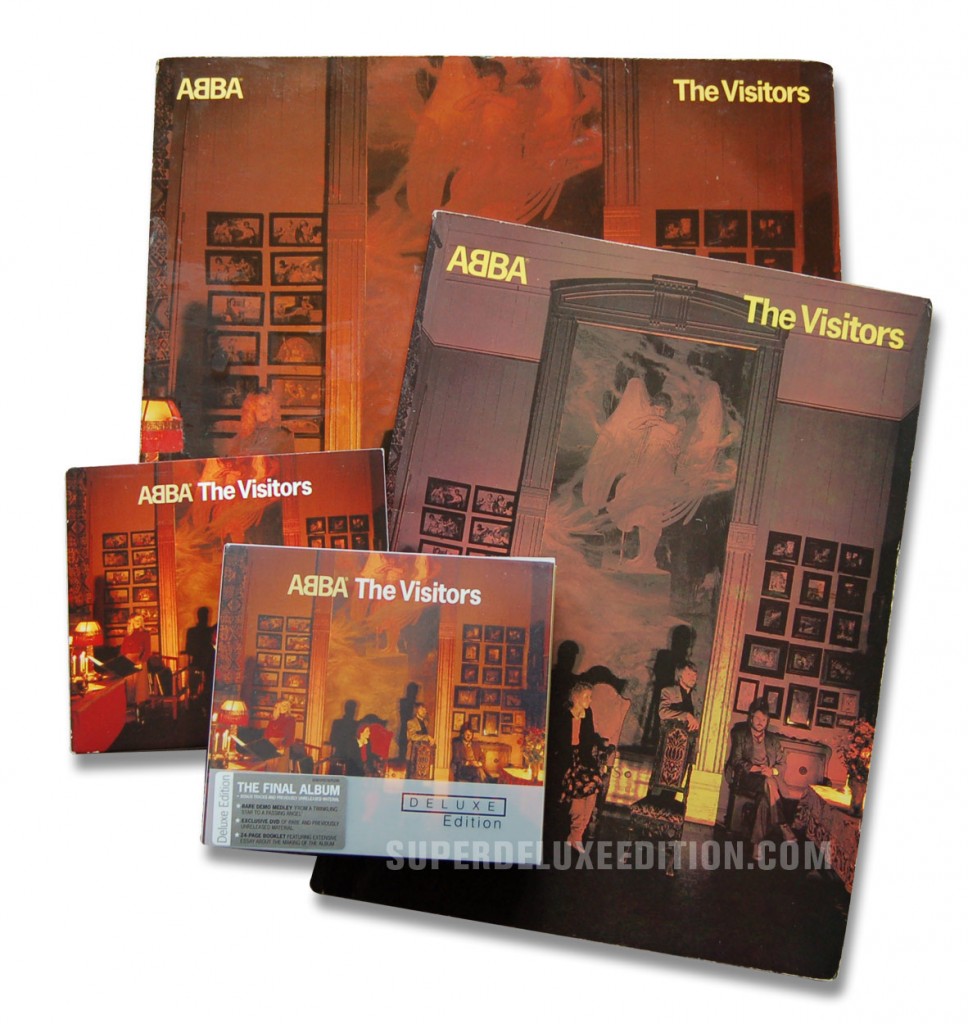 A 'group' of Visitors. LP at the back (note different typography), original music book, 2001 reissue CD and new Deluxe Edition at the front

Just Like That was a sixth and final song recorded in 1982. I has never been released in full, with only a snippet appearing within ABBA Undeleted. It should really have been on this set. They should also have included the audio from the live Dick Cavett Meets ABBA performance of Slipping Through My Fingers, especially since it has been released previously on the Thank You For The Music box set back in 1994. The CD is 74 minutes long, so they may just have squeezed both tracks on. More demos would have been welcome but that would have required both a second CD and Bjorn and Benny to rethink their fairly strict policy of not releasing studio outtakes or demos (Twinkling Star.. not withstanding).

The DVD is an NTSC all-region disc, and like Super Trouper from last year, it is a bit of a mixed bag. The live performances of Two For The Price Of One and Slipping Through My Fingers from the Dick Cavett Meets ABBA show (recorded in Spring 1981 with only three tracks for the album completed) are definitely a highlight, but ABBA in London with Noel Edmunds is not particularly interesting. Much better, although slightly amateurish and shambolic, is ABBA in Stockholm, another TV appearance which at least has some interesting questions and answers from the band.

We get the original promo clip to When All Is Said And Done, but where are the videos for One of Us, Head Over Heels, The Day Before You Came and Under Attack?

There are some rather superfluous adverts for The Singles – The First Ten Years and an international sleeve gallery, and that’s it for the DVD.

This deluxe edition is nicely presented in an eight-panel digi-pak which once folded slides into a transparent sleeve. There is some very sharp, period photography which looks restored, and the 24-page booklet does a solid job of telling the story of the album and the events of 1982. There are no lyrics included however, unlike the booklet in the 2001 reissue.

Eight-panel digi-pak holds both discs and the booklet

The approach to this deluxe edition hasn’t changed much. It was a big surprise to be treated to the demo sequence of Like An Angel Passing Through My Room, but otherwise bonus audio and video should be reasonably familiar to most fans. A few missed opportunties, no doubt, but one of the best aspects to this reissue is the incredible job that has been done with the remastering. Comparing this to the 2001 issue is a revelation, with the former CD very loud and lacking the dynamics of this release.
For that reason, even if you are not interested in the ‘bonus’ material, it is certainly worth getting this deluxe edition because The Visitors has never sounded so good.