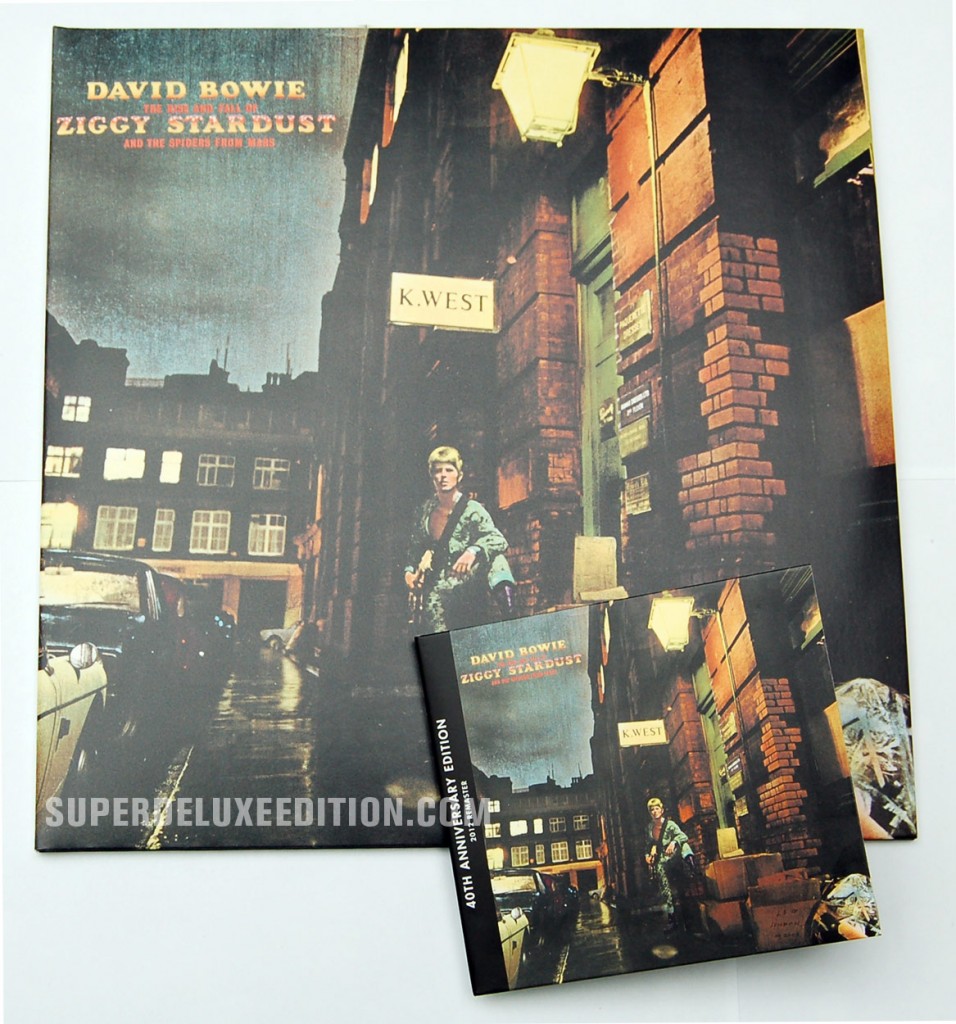 David Bowie‘s classic album The Rise And Fall Of Ziggy Stardust And The Spiders From Mars was last week reissued by EMI as a remastered CD and an LP/DVD combo. This was to commemorate the 40th anniversary of the 1972 album.

Since the original RCA CD issue in 1984 we have had quite a few variants and reissues: 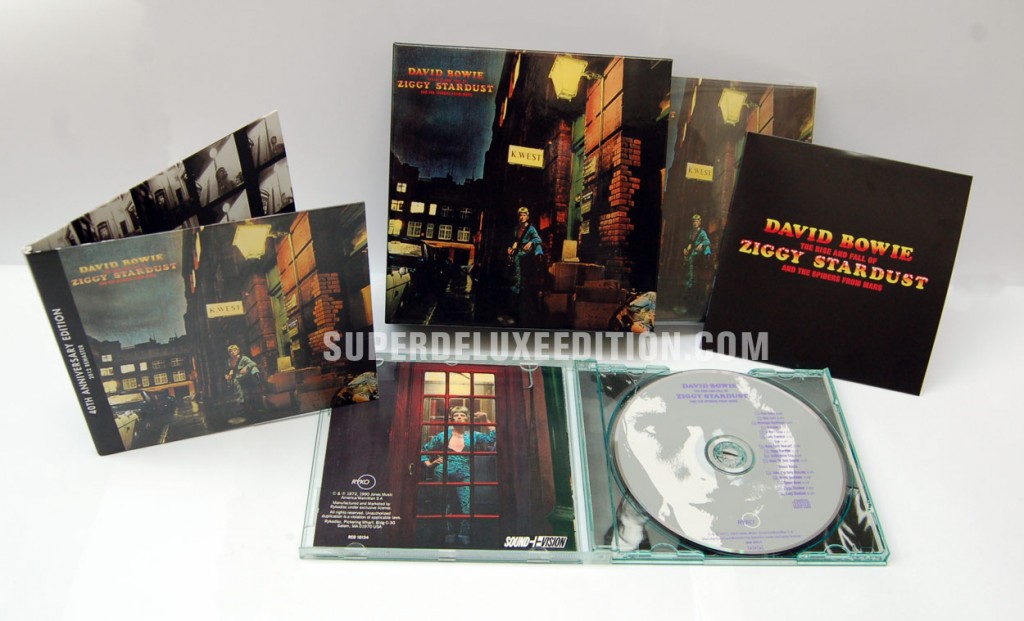 Given this multitude of reissues, do we really need another version of this album? You might think not, but fans and audiophiles generally find something to grumble about with all the versions above, whether it’s the lack of bottom end on the overly bright Ryko/EMI issue from 1990, or the bad edits and switching of the stereo channels on the 30th Anniversary issue in 2002. There was a general feeling of ‘unfinished business’ with this album and even David Bowie himself, in the past, has described his disappointment at this classic record sounding somewhat ‘thin’ on CD. 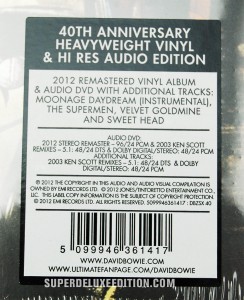 The good news is that this new remaster has been approached with care and intelligence. Ken Scott the original producer, recruited Ray Staff, the original recording engineer from Trident Studios, to go back to the original tapes and remaster the record. Ever since the Abbey Road team did such a superb job on The Beatles remasters back in 2009 it seems that mastering engineers have the freedoom to really care about the sonics of the original record and are no longer expected to simply whack up the loudness and squash the dynamic range for the iPod generation.

With that in mind, everything has been kept in the analogue domain as much as possible (completely, for the vinyl version). The result is a fantastically detailed mastering that sounds incredible, particularly on the thick, flat, 180g vinyl version. The vinyl LP is unbelievably quiet – our copy was virtually silent with no snap, crackle or pop. But even on the CD it retains a certain analogue warmth that is much easier on the ears than the digital harshness evident in previous editions.

Unlike the bells and whistles box set of Station to Station from 2010, EMI have kept the offering fairly simple this time around. Fans have a choice of CD or LP/DVD, although the purchasing decision is not as easy as it sounds.

This is straightforward. The album as remastered by Ray Staff in 2012, on a standard CD, packaged in gatefold card sleeve, with inner sleeve replicating the original 1972 design. There are no bonus tracks. The front cover has a black band down the left hand side which reads “40th Anniversary Edition – 2012 Remaster”. 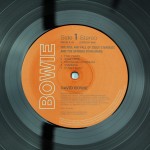 The LP and DVD are not available separately but come as a pair. The vinyl as described above looks and sounds beautiful. The orange label replicates the old RCA design, and the record comes in a thick gatefold sleeve (unlike the original issue) largely to accommodate the included DVD, which slots neatly into a pocket within the right-hand panel. Gatefold aside, EMI have done a solid job on replicating the original vinyl design of Ziggy Stardust. The artwork has been noticeably brightened to bring out more detail, at the expense of some contrast, and the inner sleeve design does replicate the original, albeit with some minor paper and typeface differences. 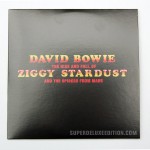 The DVD comes in a simple card sleeve with a bespoke front cover design showing the familiar yellow and orange typography from the album cover on its own, on a black background. The DVD is a key component of this package because it contains the following:

The surround sound mixes on this DVD were created in early 2003 for an SACD (super audio CD) release. The SACD format is hi-res lossless in both surround and stereo, whereas the standard DVD format with this release only supports hi-res in stereo not surround (hence we ‘make do’ with DTS and Dolby Digital for 5.1). Those additional tracks mentioned were not issued at the time (on SACD) and are previously unreleased in this 5.1 form. The Supermen is the alternate version that was on the original Ryko/EMI reissue and Sweet Head has the studio chatter at the beginning the was not present on the Ryko/EMI but was on the 2002 30th Anniversary bonus disc. The instrumental of Moonage Daydream sounds pointless, but it was impossible to listen to it without reaching for the a ‘microphone’ (i.e. hairbrush..) and getting sucked into some karaoke! The whole album in instrumental form would have been fantastic. Actually our DVD appears to have an error on the surround mix of this instrumental. The familiar two-chord intro ‘misses’ its entry in some of the channels. Possible authoring error? Let us know if you have experienced similar. 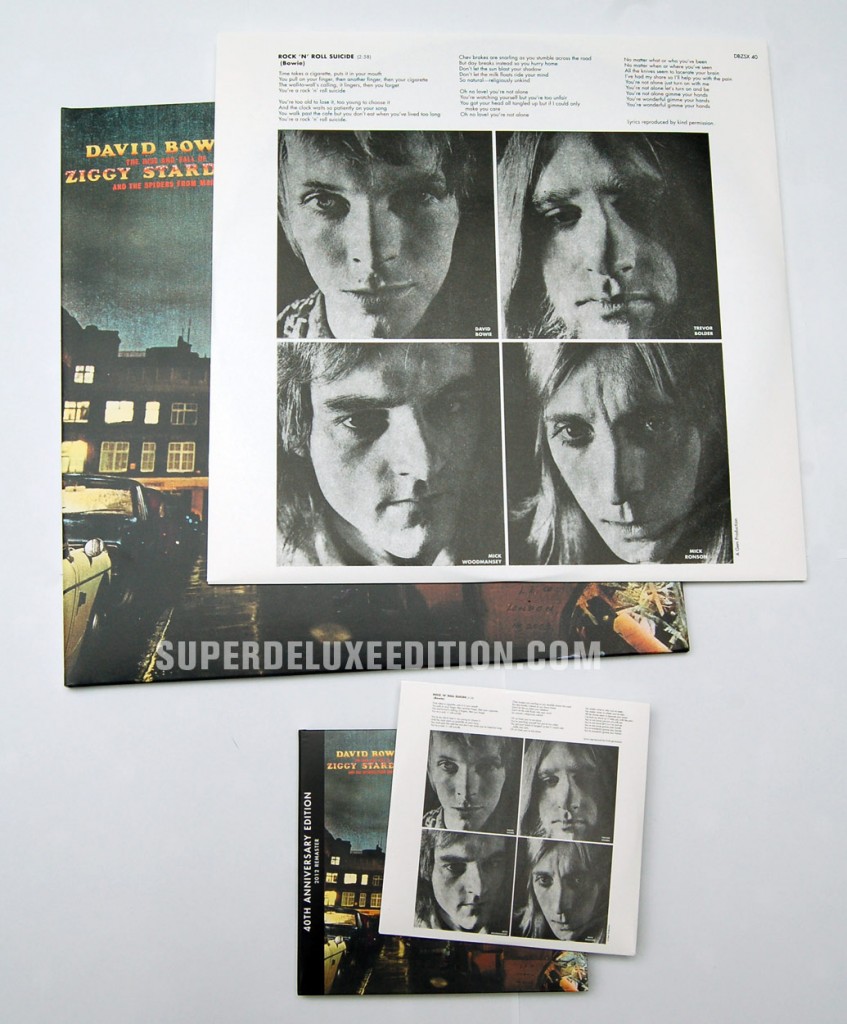 To be honest Ziggy Stardust is not an album that really needs to be in 5.1 and if it hadn’t been created 9 years ago, I doubt it would have been commissioned today. That said, it sounds fine, although not earth shattering. Most of the action is focused on the front three channels with the rears used largely for acoustic rhythm guitar, occasional backing vocals, finger clicks (Soul Love) and sometimes piano (Star, Moonage Daydream).

The hi-res stereo of the 2012 remaster sounds superb in this better-than-CD form, but avoid the stereo version of the 2003 mix – it’s horrible. Overly loud vocals and very ‘clean’ sounding (having been remixed), it simply lacks the authenticity of the original mix.

If you love this album then we strongly recommend you buy this reissue. It’s absolutely superb. The question is whether to go for the CD or LP/DVD? EMI have not made it easy.

If you haven’t got a turntable but do have a surround sound set-up or a DVD linked to a decent amp and set of speakers, then buy the LP/DVD and sell the LP (or give it to a friend). The DVD will give you hi-res stereo which makes the CD superfluous, and the surround mix is there if you can make use of it.

If you do have a turntable but don’t have the appropriate DVD set-up, then do the opposite of above – buy the amazing vinyl and sell or giveaway the DVD.

If you don’t buy vinyl and have no interest in hi-res audio or surround sound mixes, then it’s easy. Buy the CD.

Whatever you do be sure to play it at maximum volume…

(US only at present). 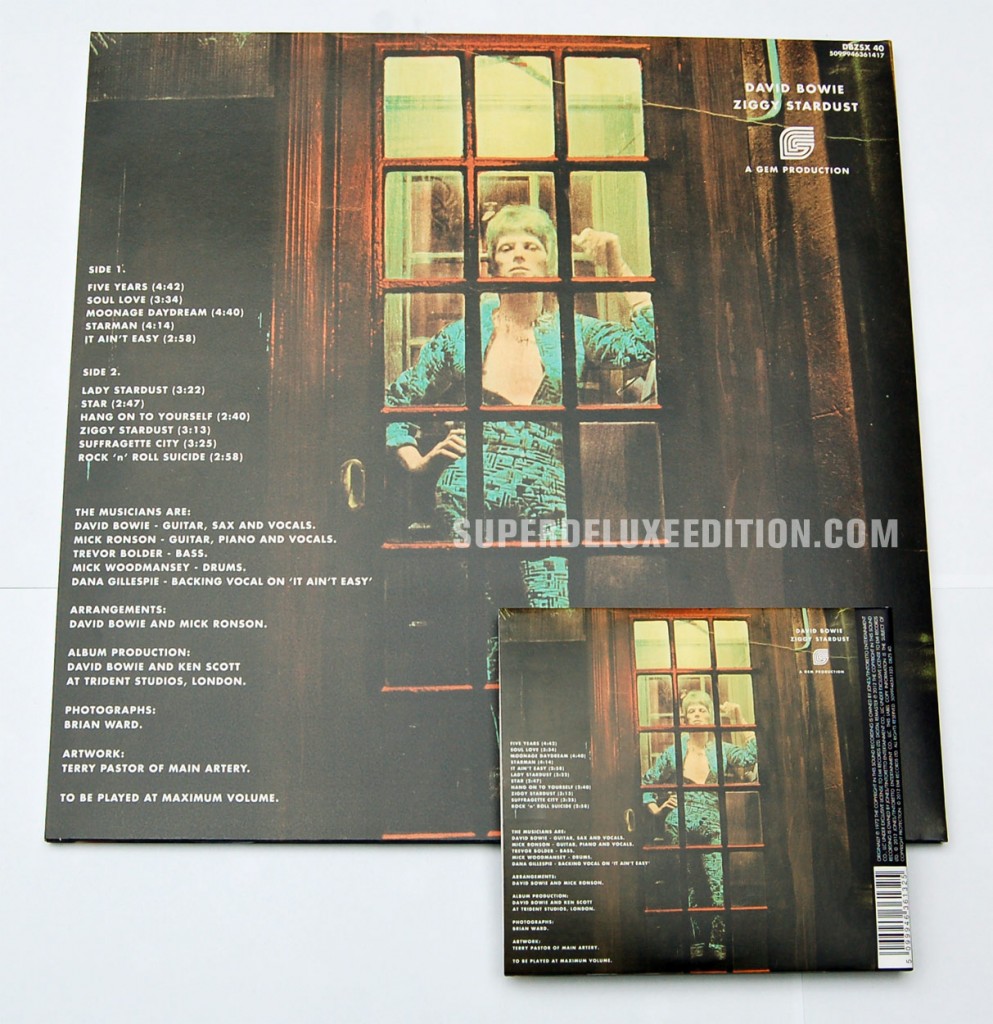