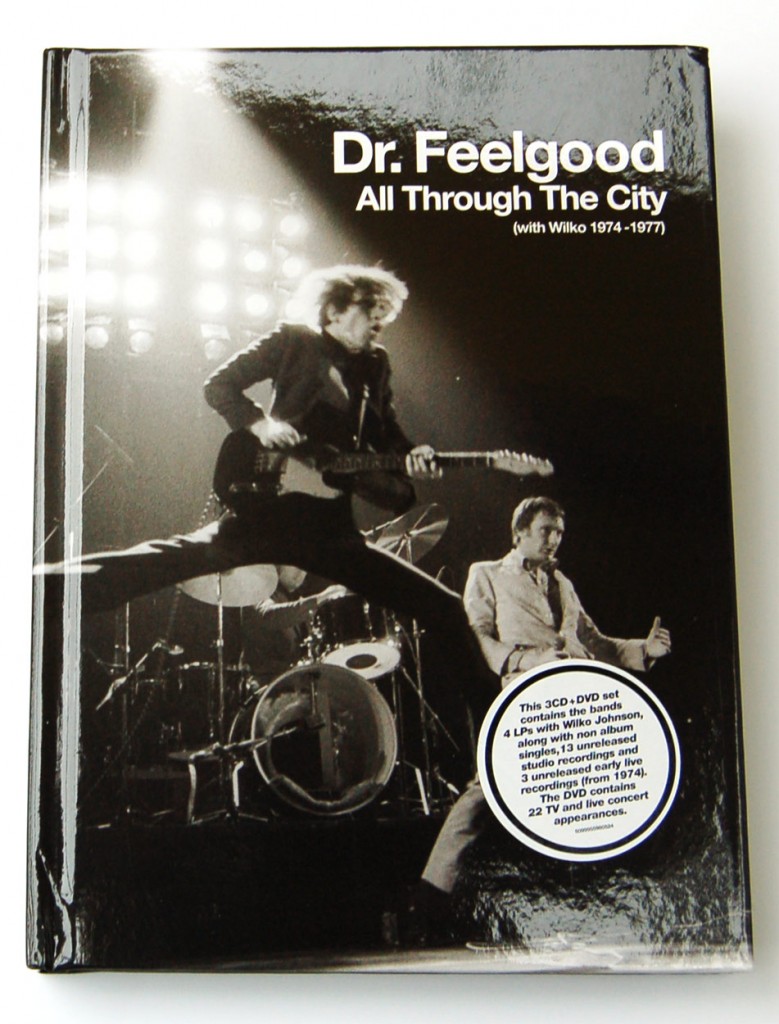 Dr. Feelgood formed in 1971 and hailed from Canvey Island in Essex. The original line-up lasted until 1977, and were led by singer Lee Brilleaux with guitarist (and songwriter) Wilko Johnson, bass player Sparko (John B. Sparks) and drummer The Big Figure (John Martin).

The band were a tight-knit British R&B outfit known primarily for their powerhouse live performances and their influence on a generation of artists such as The Boomtown Rats, The Clash and The Ramones.

This classic Wilko Johnson era of Dr. Feelgood (he left in 1977) is celebrated with this new four-disc set from EMI.

Two CDs gather together all three studio albums from this period (Down By The Jetty, Malpractice (both 1975) and Sneakin’ Suspicion (1977)) plus the essential live document – and the band’s only number one album in the UK – Stupidity (1976). A third CD offers 13 previously unreleased studio recordings, plus a gathering of rarities and further live tracks. A DVD with a host of live TV appearances completes the set.

Down By The Jetty was recorded in mono because Wilko Johnson “didn’t know anything about recording” although he did realise that there is a limit to have much mixing you can do with a three piece band and he could only see the stereo image diluting the power of the boys from the Thames Estuary. This box contains a few of the bonus tracks from the 2006 special edition of the album on disc three, along with four tracks from the album performed live at Cardiff  Top Rank in June 1974 (all previously unreleased). Down By The Jetty is the only album on the box not newly remastered (it uses the 2006 remaster).

Because the classics like She Does It Right, Roxette and All Through The City tend to clock in at the three minute mark, disc one has enough room to hold both their debut and Dr. Feelgood’s second album Malpractice. Although engineer Vic Maile was originally touted as producer for this album, in the end the band did most of it with Maile only contributing to three tracks (Back In The Night, Another Man and Rolling and Tumbling).

A very big influence on the band, and Wilko Johnson in particular, was English rock ‘n’ roll group Johnny Kidd & The Pirates. Best known for their 1960 number one Shakin’ All Over, they underwent multiple line-up changes with guitarist Mick Green joining in 1962.  United Artists A&R man for the UK, Andrew Lauder, suggested in 1975 that Johnson might want to get together with Green and see where it led. In the end it led nowhere because the then disbanded Pirates reformed shortly after, but three previously unheard tracks from the sessions make an appearance on disc three of this set.

After the excellent live Stupidity the band’s next album Sneakin’ Suspicion would be their last with Wilko Johnson. Recorded in Wales in the famed Rockfield residential studios, the sessions were beset with tensions and arguments over which tracks to record and how the album should be produced. In the end after these unsatisfactory sessions, Johnson left the band and producer Bert de Coteaux took the tapes to the US and mixed and sequenced the album for release.

Many of the unreleased tracks from disc three are from the sessions for this album. Everybody’s Carrying A Gun (a Johnson-penned track recorded, but not selected, for Sneakin’ Suspicion) is here in two versions, along with other demos and alternate versions.

The DVD is a real highlight with some excellent live TV performances including The Geordie Scene from the UK’s Tyne Tees television. Seven tracks are performed live in the studio in front of a bunch of 1970s teenagers ‘bopping’ along unconvincingly. As well as a Whistle Test performance (great sound quality) there is video footage of the Live At The Kursaal performance in Southend in November 1975 (some of the audio from this performance ended up on Stupidity).

This box set comes in a now quite familiar hard-back book format, with two disc transparent tray inserts in the inside front and rear covers. The discs are the overlapping style to reduce the height of the box itself. The design of the packaging is excellent with the much period detail throughout, including newspaper cuttings ‘lining’ the inside covers, some great period photography (including original tape boxes) and a reproduction of Tales From Feelgood a somewhat bizarre comic creation (see pictures). 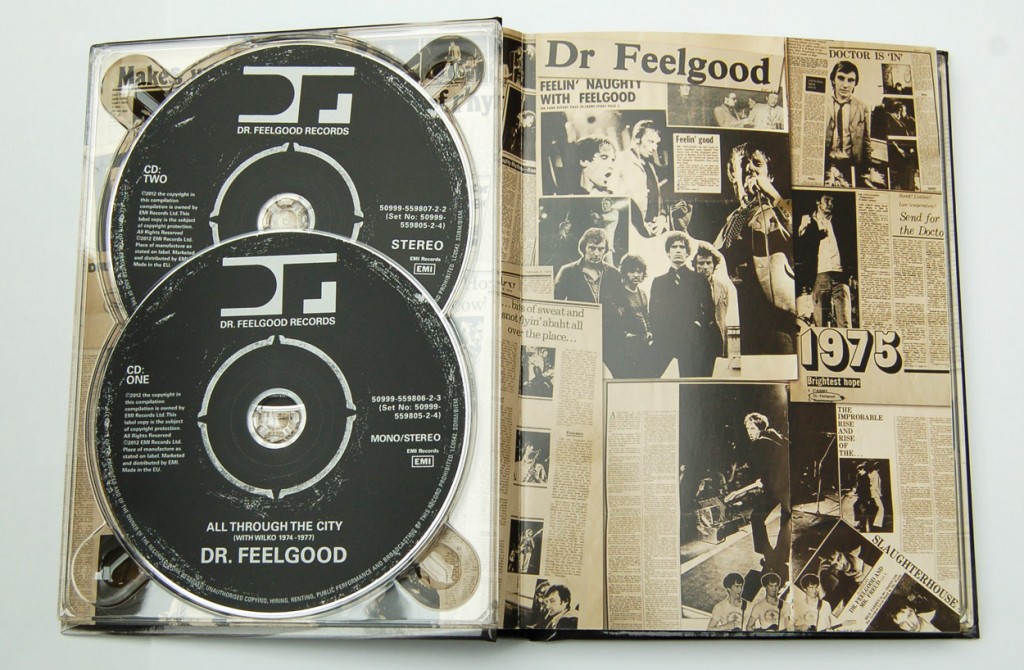 An informative interview from late last year with Wilko Johnson talks you through the period in question and all the bonus tracks have details around when and where songs were recorded and who produced and engineered them.