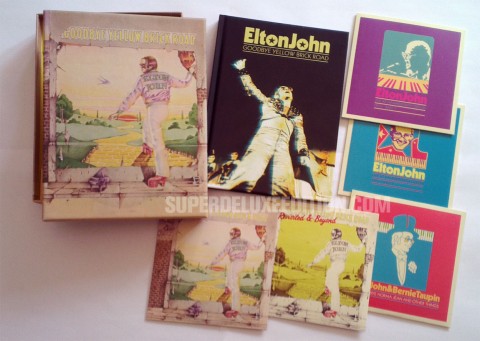 Considering this album is Elton’s Band on the Run, his Dark Side Of The Moon, the packaging is a little disappointing. Universal have got us used to relatively lavish sets involving large books, memorabilia and the like. The Who‘s Quadrophenia and Tommy both enjoyed this kind of presentationand the last two Velvet Underground super deluxe sets and virtually everything by Eric Clapton were also what you might broadly term ‘luxurious’. But Goodbye Yellow Brick Road isn’t. It comes in a small-ish 8″x 6″ box which contains a Ladybird-sized hardcover book and the five discs (4CDs+CD) within. These boxes are familiar enough, since Universal have used them regularly in the last few years for the likes of T. Rex (Electric Warrior), Tears For Fears (The Hurting) and Level 42 (Running In The Family), but something is wrong when a solid gold rock classic like GBYBR is packaged on a par with the recent Ocean Colour Scene Marchin’ Already set!

To be fair, the book is very good with decent notes, great reproduction of David Larkham and Michael Ross’s original lyric illustrations and some superb archive photography (including photos of Elton’s stage outfits), but why so small? We’ve criticised big books in the past for being basically pointless (step forward, The Rolling Stones‘ GRRR!) but this book is certainly not that, it just needed to be done on a grander scale, to make the most of the illustrations and photos. This certainly doesn’t come close to the exemplary McCartney deluxe volumes or The Who books.

The overall design is certainly attractive and in keeping with the original release but the card sleeves are wafter thin (no gatefolds) and shrink-wrapped to within an inch of their lives. The only way to get into the damn things without creasing or bending the top corners is to get a razor sharp scalpel and – carefully – run the blade along the top edge. Disappointing.

With one notable exception (more on that later) the actual audio/video content is great. The highlight is Elton John Live at the Hammersmith Odeon, a December 1973 gig across two CDs. Elton’s in fine voice and the performances are note-perfect. It’s charming to hear a freshly-minted Candle In The Wind (“this is a song about Marilyn Monroe”) without the baggage, and the ‘greatest hits’ that would serve him well for the next four decades (Daniel, Rocket Man, Crocodile Rock etc.) are all present and correct.

There’s not much to say about the album itself other than it’s back on one disc having been originally issued across two CDs. That was then superseded by a one disc remaster and ten years ago for the 30th anniversary, the hybrid SACD switched back to two! The Bryan Forbes documentary on the DVD (Elton John And Bernie Taupin Say Goodbye To Norma Jean and Other Things) scores highly for the nostalgia factor, having been made in 1972/3.

It’s the bonus disc (CD2) that is the runt of the litter here with the album ‘revisited’ by a series of contemporary acts doing cover versions. What can you say to such folly? If I want to hear Ed Sheeran, Fall Out Boy or Emeli Sande I’ll buy their records, thanks very much. I buy Elton John releases to hear Elton John, not so that “Miguel, featuring Wale” can aurally vomit over Bennie and the Jets. This should have been a Mojo cover mount CD to promote the product not part of the actual product itself.

The compact size has at least kept this super deluxe edition box of GBYBR affordable. If you’re a fan, the £40 price tag will probably ‘allow’ you to buy this for the nth time. It’s just about worth it, although why the flamboyant Mr. John didn’t push the boat out and create something with true ‘wow’ factor for his best-loved work remains a mystery.