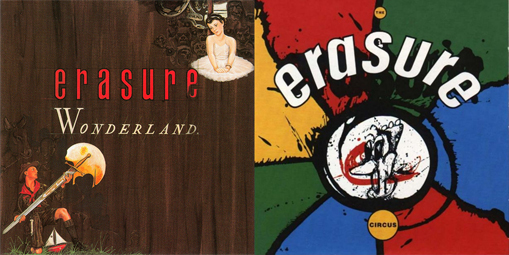 A flop and and a hit  – Erasure’s excellent first two records show the power of hit singles, if nothing else

It seems incredible listening to Erasure’s rather accomplished debut, Wonderland, to think that, back in 1986, it was a hit-free zone. Despite some excellent singles (Who Needs Love Like That, Heavenly Action, Oh L’Amour) and the already solid pedigree of Vince Clarke (Yazoo, Depeche Mode), this was indeed the case. None of the three singles released made the UK top 40.

The band came about after Clarke, looking for his next ‘project’, advertised in Melody Maker for a vocalist. Andy Bell applied, and the musical partnership was formed which endures to this day. Back in 1985/6 Erasure may have lacked the boyish good looks that helped propel contemporaries a-ha to the upper reaches of the UK chart, and they could not compete with the presentational skills and cool detachment of the Pet Shop Boys, but what they did have, in abundance, was great songs, and a rather refreshing, fun, carefree attitude. Andy Bell also turned out to be a good lyricist and co-wrote eight of Wonderland‘s eleven tracks with Clarke.

The album is full of synth-pop gems – Push Me, Shove Me, Pistol, Who Needs Love Like That all sound fantastic on the dance floor, with appropriate smatterings of rhythm guitar, but the softer more emotional tracks work just as well. Single Heavenly Action‘s opening line “Angel made in heaven, all I want is your love, give me some of that action, reaction” is set to a gorgeous, silky-smooth melody and on listening to My Heart…so blue (a Clarke solo composition) it’s hard not to reach for the lighter and start waving it in the air. A superb torch song. And let’s not forget about Oh L’Amour – now rightly regarded as an Erasure ‘classic’, it was a commercial failure as a single for the band, but came good in 1987 when it hit the top ten as a single for boy-girl pop duo Dollar.

There is a certain earnestness and innocence to some of the songs that is reflected in the (excellent) storybook artwork for the album. Similarly, two of the promos found on the DVD – Who Needs Love Like That and Heavenly Action – are playful affairs with both Andy Bell and Vince Clarke guilty of dipping a bit too much into the dressing up and make up box. In retrospect, perhaps the cross-dressing in the silly ‘wild west’ video might have not helped establish the band as well as a more straightforward approach (it was their first single after all).

This deluxe edition contains the album on CD 1 but maintains the three extra tracks found on the original CD release (two album track remixes and a b-side remix). CD 2 offers us a further array of remixes including the at-the-time limited edition ‘Mexican Mix’ of Who Needs Love Like That (but not it’s b-side, the “Tacos Mix” of Push Me, Shove Me). Also included is the rather inaccurately titled “Extended as far as possible mix” of Push Me,  Shove Me – at 4:09 it’s actually a minute shorter than the original album version! This second disc could easily have been filled with period remixes, but space is saved to allow us to hear previously unreleased tracks from the BBC Radio One Session archives. Five tracks from the album are performed, including an rather echo-laden Who Needs Love Like That, all recorded in December 1985, before the albums release.

As well as the aforementioned promo videos, the DVD has a previously unreleased concert Live at Karlsson, Stockholm from August ’86. This is a great watch. Andy comes across as an eager to please, cheeky puppy, albeit one in his underwear. He sweats a lot, while flanked by three men in suits (two backing singers and Vince Clarke). It’s all very ‘eighties’, especially Andy Bell’s dancing. Clarke comes across like a time-shifted Mark Ronson, easily switching roles from keyboard boffin to rhythm guitarist as the track dictates. No make up, or women’s clothes here. He doesn’t even smile. One really nice touch with this DVD is that all the concert audio is available as MP3 files from a ‘downloads’ folder, when the disc is inserted into your computer. A thoughtful inclusion, Duran Duran could learn from this practise – there were no such offerings from their recent deluxe editions (when they ran out of space on the Notorious 2CD+DVD Deluxe Edition, more remixes were made available online – Duran Remix EP – for additional cost).

During this Stockholm concert Erasure perform an early version of Sometimes, the lead single from the next album The Circus. It already sounds like the big hit it would become (it peaked at number two on the UK chart). This single changed the commercial fortunes of Erasure overnight, and they would get the breakthrough they deserved with The Circus. Three of the four singles hit the UK top ten, with only It Doesn’t Have To Be missing the cut, when it stalled at no.12.

With The Circus Erasure seemed to have more purpose and focus. Gone were the silly videos with story lines, replaced with slightly more generic fare, presenting the two men in jeans, white t-shirts and bomber jackets.  The Top of the Pops performances (included on the DVD) had the same ‘branding’ (or lack of it). Two blokes in jeans and t-shirts, one playing the instruments the other singing. While not a groundbreaking presentation, was something that seemed to work for the public.

The songs, arguably, had a slightly harder edge, a broader sonic palette and more commercial focus. Sexuality, Leave Me to Bleed, Victim of Love and the social commentary of The Circus are evidence of this. The production duties for The Circus, as for Wonderland, were the responsibility of ‘Flood’ aka Mark Ellis, a Mute Records favourite who would go on to have an incredibly successful career as a producer and engineer for the likes of Depeche Mode, U2 and The Killers.

The Circus Deluxe Edition follows the pattern established by Wonderland. We find eight remixes on CD 2 followed by more BBC Radio One Sessions (this time from March 1987). There is no place for any of the remixes, orchestral versions, or live tracks that made up The Two-Ring Circus in 1987. Whether this will be reissued in the future or become a back catalogue anomaly, remains to be seen.

The DVD gives us another live performance, in addition to the TV performances and promos. This time it’s Live at the Seaside (Brighton Dome 14 April 1987). Not quite as enjoyable as the Live at Karlsson performance, but they do have a more varied set. When the singles are performed the live performance regularly cuts to the actual promos, which is somewhat annoying.  Leave Me to Bleed does have some good behind-the-scenes footage though. Again, we get the whole concert as downloadable MP3s, which is excellent.

Although The Circus didn’t hit the top-spot on the UK charts it certainly got the ball rolling. It would be eight years and four albums later before another Erasure record would fail to get to no.1.

A note on the packaging. Both albums come in old-style ‘fat box’ double-cd cases. Slightly disappointing, given the more luxurious treatment given to The Innocents a few years back. The artwork is reproduced with care and clarity, but you do have to put up with “Remastered Special Edition 2CD+DVD” in a box on the bottom right of both album’s cover art. What’s wrong with a removeable sticker? If you own the Arcadia So Red the Rose deluxe edition, it’s an identical treatment.

These niggles apart, any fans of eighties pop should be seriously considering getting their wallets out. The less familiar Wonderland should prove a surprise to many, and The Circus sounds as good as ever.