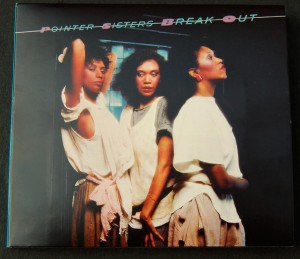 The Pointer Sisters’ finest achievement, celebrated with a deluxe edition offering both versions of the album

The Pointer Sisters had solid success in the 1970s with a soft rock audience. This reached its culmination in 1978, with their album Energy, which included a cover of Bruce Springsteen’s Fire that reached no. 2 on the US singles chart. Although they continued to have hit singles for the next few years, they yearned for the really BIG hit album which had eluded them.

Everything was about to come together dramatically, in 1983, as they worked on what would become Break Out, with producer Richard Perry.

Curiously, in the (excellent) booklet included with this deluxe edition, Richard Perry points to Nightline as the song that kick-started the direction they would take with the album (Michael Jackson had recorded it for Thriller, then left it off at the last minute). This is interesting to consider, since it’s one of the weaker tracks on the album, which says something about the quality of the material that Perry and the sisters would bring together, by the time of release.

This inspirational track became a casualty of marketing, when in 1984, the record company decided to issue a reworked version of the album, and include a remix of the 1982 single, I’m So Excited. Nightline was left off this second issue of Break Out.

The album became a phenomenon, with an incredible run of six singles, starting with the soulful I Need You, in September 1983, and ending with the sparky Baby Come and Get It in March 1985. The four singles in between those two,  all hit the US Top Ten singles chart.

The first big hit, Automatic, has that incredibly controlled, deep lead vocal from Ruth Pointer, before she lets rip, unleashing the familiar exuberant chorus. Not a note out of place. If you are not moving your body around while listening to it, then you’d be advised to check for a pulse. Jump (for my love) hit no.3 and would go on to win the group a Grammy Award, and I’m So Excited finally got the chart placing it deserved (no.9), after rather underperforming when originally released in 1982. Anita, Ruth and June Pointer all had a part in writing that particular song, and it has since become regarded as their signature tune.

Neutron Dance (which peaked at no.6 in the US) could probably be described as the surprise hit from the album. It’s not a bad song by any means, but the fast paced poppy number, with its dominant synth-motif running throughout, lacked the fizz of earlier singles. But thanks to prominent placement in the opening scene of a certain Eddie Murphy blockbuster – Beverley Hills Cop – the song had massive recognition factor. Incidentally, Allee Willis who co-wrote this track with Danny Sembello, would later co-write What Have I Done To Derserve This with the Pet Shop Boys.

Break Out would have sold millions even if the only good songs had been those six singles, but album tracks such as Dance Electric and Telegraph Your Love are no fillers. In fact, ironically, considering the group’s desire to appeal more to black radio in the US, it’s mid-paced soulful numbers such as Easy Persuasion, that tend to drag somewhat after so much superior, pacey dance-pop.

This deluxe edition from Big Break Records, allows us to listen to both the 1983 version of the album and the revised 1984 version, which as well as adding I’m So Excited, remixes a few tracks and rejigs the running order. 1984 ‘wins’ in terms of song selection and the breathless run of big singles on ‘side one’.

Appended to the end of each version of the album (CD 1 contains 1984, CD 2 1983), is a comprehensive selection of period remixes. You can’t ask for much more than ALL the 12″ versions and ALL the 7″ remixes for each of the six singles plus a few alternative 12″ mixes. This was the 80s and these are all an essential part of the fun.

Being old enough to have watched Top of the Pops in 1984 when these singles were charting, it’s hard to know how much of the joy I got from listening to this new reissue of Break Out comes from the songs themselves or just the sheer nostalgia of good times past. But then again, is that even important? The music is at the heart of the matter, either way.

Here’s a simple fact. Few artists will ever create pure pop records with the consistency and quality of Break Out. The production is amazing, the songs are top-class and the performances from the Pointer Sisters are uniformly excellent and full of charm.

There will not be many reissues this year that I enjoy (or play) as much as this one. Big Break Records should be applauded for approaching the task of the re-presenting this material in a thoughtful and intelligent manner. After all, great pop music matters just as much as great rock music, and while I haven’t seen this album on any critics ‘all-time’ list, Break Out is undoubtedly one of the best pop albums released in the 1980s.

Break Out Deluxe Edition by the Pointer Sisters is out now via Big Break Records.