Live: Tears For Fears ‘wake up’ to the love as they return to the London stage 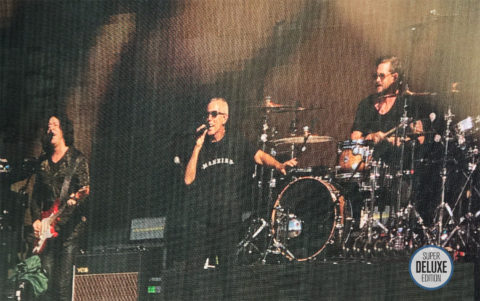 Tears For Fears played live in London for the first time in 12 years, on Saturday.

The band were supporting The Killers and played a hour-long set at the BST Hyde Park festival which included tracks from all four albums recorded when both Roland Orzabal and Curt Smith were band members – namely The Hurting, Songs From The Big Chair, The Seeds Of Love and Everybody Loves A Happy Ending.

On a scorching afternoon (Roland later tweeted “that was the toughest show I’ve ever played. Hotter than Vegas.”) there was no messing around as the band opened with their US number one Everybody Wants To Rule The World, with Curt in fine voice.

The only song the 65,000 capacity crowd may not have known was the one that followed, a performance of Secret World  from 2004/5’s Everybody Loves A Happy Ending – the comeback album that didn’t enjoy the commercial success it deserved.

Thereafter, it was largely hits all the way. The complexity of Sowing The Seeds Of Love was deftly handled and it sounded studio-perfect, while four tunes from their 1983 debut The Hurting (including the only none single of the day, Memories Fade) emphasised just how strong that album really is – with its bedsit/new wave appeal – despite being commercially overshadowed by Songs From The Big Chair.

Break It Down Again also featured and is the worldwide smash that never was. It was the lead single from the Curt-free Elemental (issued in 1993). Such is the strength of this number (co-written and co-produced by the late Alan Griffiths), that Curt has presumably decided it would be churlish to try and veto its inclusion, and its been a stalwart in their set lists for years.

In fact, it was on the Elemental tour that Tears For Fears first performed Radiohead‘s Creep and it has (a-hem) crept back into their set list recently and went down very well on Saturday in London.

The show ended with two big hitters from Songs From The Big Chair. The gorgeous Head Over Heels (which suffered from a piano too low in the mix) criminally didn’t segue into to one of my very favourite ‘deep cuts’, Broken (aka We Are Broken). It just sounded weird to me without it, the song seemed to ‘hang’ awkwardly at the end. A bit like hearing A Day In The Life and someone fading it out before that piano chord at the end.

The final sign-off was of course Shout, another song which reached the top spot in America but failed to do so in the UK. It was a slightly rocky performance actually, with the sequencers and synths not dominating in quite the same way as they do on the record.

Vocally and musically the band were very strong indeed and they looked good too with Curt very lean, showing off his LA teeth and tan! I actually think they were better sounding than when I saw them in Hammersmith back in 2005, on the Everybody Loves A Happy Ending Tour. Talking of which, there was quite a poignant moment when Roland mentioned this and he was almost lost for words: “The last time we played in London, it was 2005,” he said. “This is a wake up call… Wake up, Tears For Fears because England quite likes you.”

This was mentioned around the mid-point of the set and at the time, I actually thought the ‘wake up’ line was a cue for the band to perform the title track from Everybody Loves A Happy Ending (which starts with the line “Wake up! You’re time is nearly over…”). But it wasn’t. It was a singer-songwriter expressing apparently genuine surprise that this very large crowd in London was having a great time being entertained by some classic tunes.

Curt and Roland in particular are complex characters and the stage bonhomie of say, Guy Garvey from Elbow (who followed) was absent. There was just a few words from Orzabal and I don’t think Smith said anything. I also suspect they rejected the Elbow slot (who played just before The Killers) purely for logistical/personal reasons with Curt flying back to California the very next day and the band due to play the first of 13 dates in North America tomorrow. They’ve supported Spandau Ballet in the past, a band whose achievements they’ve easily eclipsed, so ego is clearly not an issue.

So yes, Tears For Fears, we do quite like you. Please get on and deliver that new album you’ve been working on for the last few years and approve the reissue of The Seeds Of Love. Also, why not come back and play a proper tour in the UK that goes beyond just the hits?

46 responses to Live: Tears For Fears ‘wake up’ to the love as they return to the London stage