Review: The Best of Spandau Ballet: The Story / 2CD deluxe 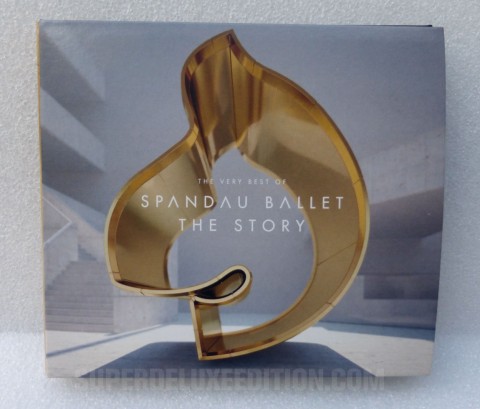 Out this week is a new Spandau Ballet collection called The Very Best Of Spandau Ballet: The Story. This compilation (available as a single CD and two-disc deluxe set) coincides with the home video release of a new documentary Soul Boys Of The Western World as well as the recent news that the band are to tour the UK in 2015. There was also a one hour ‘TV Special’ (called ‘True Gold’!) on UK television a few days back where the band performed “their greatest hits” live. If this new compilation doesn’t meet expectations then it won’t be for lack of exposure.

‘The Story’, when it comes to Spandau Ballet, arguably ended almost 30 years ago when the band left Chrysalis for CBS and their former label put out The Singles Collection in 1985 and quickly followed it up a year later with The Twelve Inch Mixes. Those are basically definitive collections – unless you happen to think Through The Barricades rates as some of the band’s best work (not really) – and so in terms of compilations, the truth is you really don’t need much else.

As if to underline this fact, 13 of the 19 tracks on the old compilation are repeated on the single CD version of this new set, The Best Of Spandau Ballet: The Story. Two singles from Through The Barricades (Fight For Ourselves and the title track), Once More from the 2009 ‘refresh’, three new tracks (produced by Trevor Horn) and 29 years are the difference between the two releases.

The deluxe edition adds a second CD which broadens the offering and makes for a more interesting exploration of the band’s back catalogue. This disc is effectively an alternative route from 1981 to 1989 with a few (seemingly random) remixes thrown in along with a dip into ‘deeper cuts’ (what we used to call album tracks) such as Mandolin from 1981 debut Journeys To Glory, Pharaoh from follow-up Diamond and Code of Love from True (1983). This CD also finds a place for two singles from 1989’s forgotten Heart Like A Sky album, a record which isn’t represented at all on the main selection.

It’s the early tracks where much of the listening pleasure is to be found, with Richard James Burgess’s inventive production style far less generic than later records and the often choppy and quirky arrangements always impressing. The band must concur because across the two-disc deluxe set Journeys To Glory is here in full, bar Reformation. The Freeze breezily appropriates the intro from Blondie’s Atomic and Musclebound is a bizarre delight; the almost industrial percussion and slinky guitar figures coupled with the butch chorus should be a bit of a mess, but it just works. Although they sing about not needing ‘this pressure on’ on Chant No. 1 (one of their five UK top 5 hits) they don’t sound like a band under pressure in the 1981-82 period. These early years are the sound of a group of young men producing great music, having fun and hits. 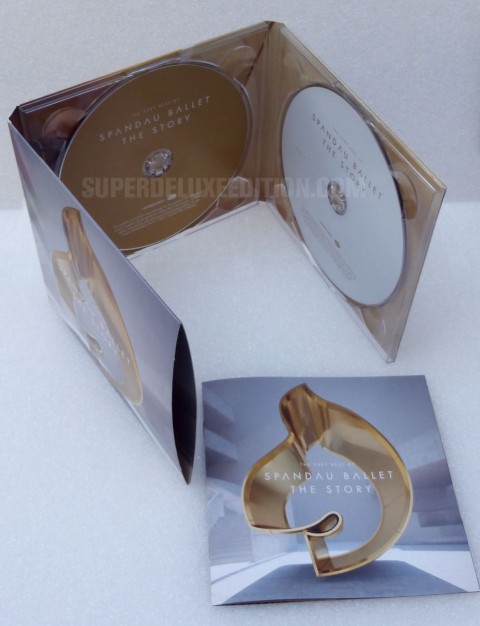 6-panel digi-pack for the deluxe, although the booklet is disappointing

The really successful transatlantic soul years (well, year – 1983) is the least interesting, partly because of over familiarity and partly down to the how less satisfying the production is all these decades later. Does anyone really actively choose to play songs like True or Gold at home these days? Surely they are tracks you just ‘hear’ without actually choosing to listen to them, via radio stations like Absolute ’80s. That’s why the second CD in the deluxe set is so important – we get tracks such as Code Of Love from the True album which benefit from not being stuck in your brain in the way that big singles are.

That’s not to say this writer doesn’t have a soft spot for some of the slick Jolley & Swain-produced tracks. I’ll Fly For You is a personal favourite so it was pleasing to see the rare ‘Glide Mix’ (actually the B-side to the original twelve-inch) make an appearance on CD 2, even if it has the it-only-ever-sounds-naff ‘speaking the lyrics’ thing going on.

After the delicate cotton white production of the mid-eighties the band decided to ‘man up’ and rock out for the 1986 ‘comeback’ album Through The Barricades. Unfortunately, Fight For Ourselves has virtually no redeeming qualities at all. The band seemed to get distracted by making some kind of statement of intent and forgot to write a good song. The title track was the biggest hit, but the weight of earnestness and the lighters-in-the-air stadium rock camaraderie just felt wrong coming from the Spandaus.

All of the new tracks are a significant improvement on the rather feeble Once More. This Is The Love is breezy, pleasant and string-laden affair, while Steal is a satisfying slice of mid-paced sophisti-pop. Soul Boy takes the top step on the podium when it comes to these Trevor Horn produced numbers. The semi-autobiographical lyrics give it some depth and it’s just the best song and best production of the trio, even if the ‘died in your arms’ line brings back memories of Cutting Crew‘s 1987 hit (not actually a bad thing).

The 12-page booklet has a few words from London DJ Robert Elms, but is really disappointing due to lack of information about the tracks. Instead of close-ups of the ridiculous gold dove sculpture, why not offer the listener a track-by-track guide from the band or some other insight? The ‘new’ group photo of the band in the middle is a bit silly – over stylised and as a nod back to the 1980s, cheeks are being sucked in to within inches of their lives. It looks like a menacing promo shot from EastEnders, although Steve Norman didn’t get the memo, so he’s smiling and not looking moody.

This blog recommends you forget about the single disc version and spend the few extra pounds on the two-CD deluxe version of The Story. If you don’t do that, despite the new tracks, Spandau Ballet: The Story  just feels like a new dust jacket on the same book we’ve been reading for decades.

The Very Best of Spandau Ballet: The Story is out now. 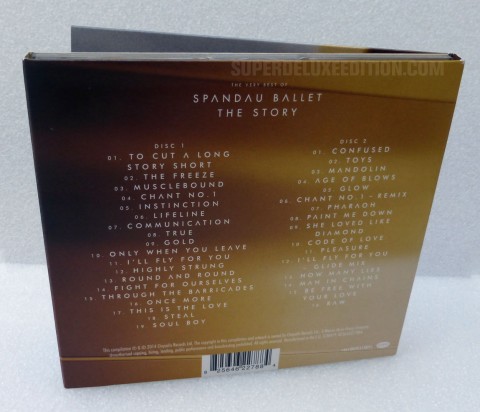 The 2CD deluxe is a more interesting ‘story’

36 responses to Review: The Best of Spandau Ballet: The Story / 2CD deluxe