Review: The The back on stage in London at the Royal Albert Hall 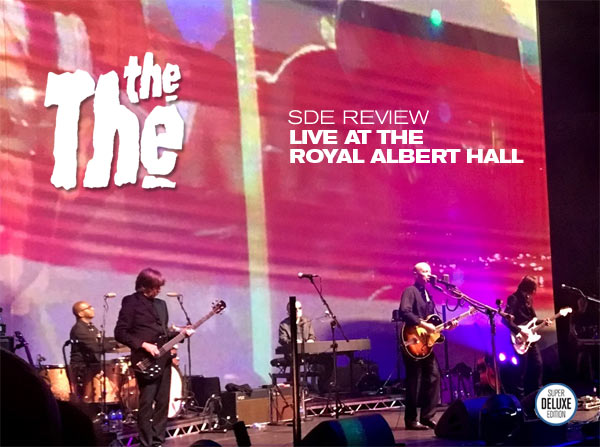 A frontman announcing the recent death of a loved one isn’t the most conventional way to open a concert, but that’s the unfortunate situation forced upon a bereaved Matt Johnson last week as he kicked off a series of The The concerts in London last week with a date at the Royal Albert Hall.

Matt’s dad, Eddie Johnson, who was due to watch his son at the show, had died a few days earlier, and while some would have been aware (the The The frontman had informed his fans via social media three days earlier) he clearly felt like something needed to be said. On Facebook he wrote of finding himself “trapped in the public eye” during this period of grieving but having no real choice by to go on with the show due to the “massive financial implications” of not doing so. To be fair, Johnson also made the point that his dad would have wanted the show to go on, so I’m sure that was in his mind too.

There was an impressive integrity in making such a personal statement and Johnson was reinforcing a lack of artifice in The The. Music and rock ’n’ roll for him obviously isn’t about fantasy – running on stage in leather trousers and shouting ‘yeah!’ – bands are made up of real people, with real lives and real problems – he wasn’t afraid to let the audience in.

Naturally, there was a warm and sympathetic response from the crowd, although almost inevitably, it made for a slight disconcerting and muted beginning to the evening’s entertainment, something underlined by the choice of Global Eyes, a relatively obscure opener from NakedSelf – the last ‘proper’ The The album, issued on Trent Reznor’s Nothing Records back in 2000.

I had a good vantage point, from the stalls, very near the front, and could see cameras all over the place. It turned out that the gig was being filmed, by Tim Pope and presumably a DVD or blu-ray release will emerge at some point. Johnson mentioned the filming as he implored people to resist the urge to watch the show through their iPhones (something the chap to the left of me was unable to do!).

Two out of the next three songs were from 1986’s Infected (including Heartland) and a fairly languid The Beat(en) generation followed soon after. I was really enjoying the show at this point but surprisingly, for a band that’s been away from the stage for so long, the atmosphere was a little muted and whether the seated environment in the Royal Albert Hall and a certain British reserve was inhibiting a full blown emotional response from the crowd, it’s hard to say.

I don’t think anyone would try to claim that Matt Johnson is a natural showman, but he did his best to gee up the crowd. Opposite from me, on the other side of the venue, fans were being blinded by a very strong white light from stage left as Tim Pope sought a monochromatic Mis-en-scène, but thankfully for them, some forward thinking production person recognised that it could be a problem and the next time I looked over they were all wearing shades!

The lighting was taken down to an intimate amber hue as the middle section of the show embraced love, lust and loss…. which can only mean songs from 1993’s Dusk! Four in a row, no less (Johnson would play seven from the album in total) and for me this was when the gig really came to life. I was a bit too young to engage with the band in the early days and come ’85-6 was too distracted with Kate Bush, a-ha and the Pet Shop Boys to give them much attention, but come the new decade and in my early 20s, the Dogs of Lust single encouraged me to seek out the band’s fourth album and I thought it was close to perfect and it was on heavy rotation for most of 1993 and for many years after.

I hadn’t necessarily envisaged the Dusk material as being a crowd favourite, and so the reaction from the audience at this point surprised me a little bit – maybe it was the transition from the political to the personal – but I looked around and saw fans singing along heartily with some almost involuntary standing up and bobbing along. Johnson probably hit the nail on the head when – looking around the room at his 40 and 50-something fans – he said that we’ve all probably lost someone, somewhere along the way (“unless you die young”) and when he sang the incredibly moving Love Is Stronger Than Death, it felt like artist and audience had truly connected.

I thought the five-piece band were very good, in a greater-than-the-sum-of-their parts kind of way and they were always disciplined servants to the songs. Despite the odd pithy comment, Johnson was a typically serious presence, although he allowed himself a chuckle when someone shouted out a request, informing fans that he could “never understand” why people asked for songs when they have a setlist written on a piece of paper and “that’s what we’re going to play”.

The last half hour of the 90-minute performance saw many people almost permanently out of their seats as The The delighted the capacity crowd with performances of I’ve Been Waiting For Tomorrow (For Most Of My Life) and Infected. Johnson did very well to deliver a note and pause-perfect True Happiness This Way Lies during the three-song encore and the number that closes Dusk – Lonely Planet – was a rousing end to the evening, its lyrics still apt a quarter of a century later.

65 responses to Review: The The back on stage in London at the Royal Albert Hall