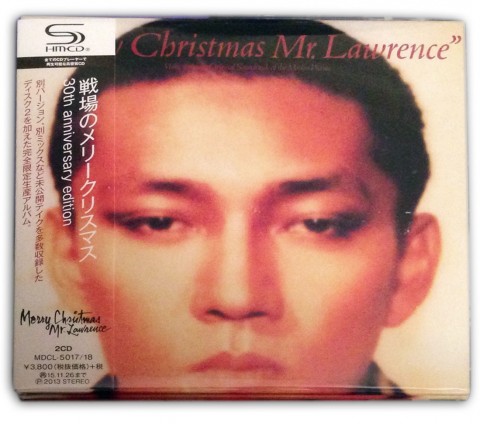 Nagisa Oshima’s Merry Christmas Mr Lawrence (1983) is one of those unusual films that has gained a greater reputation over time; it is the film debut of Takeshi Kitano, who later went on to become an award winning director and writer; Jack Celliers is one of David Bowie‘s best regarded acting roles, and the soundtrack by Ryuichi Sakamoto (who also plays a leading role in the film) has lived on beyond the silver screen, most recently forming part of Anne Dudley’s Rhythm Of A Decade performed by the BBC Concert Orchestra at London’s South Bank Centre.

The main theme of the film has been covered by many musicians, from Watergate’s dance hit in the late 1990s to a recent operatic version by Paul Potts. The original single recording, with vocals by David Sylvian (Forbidden Colours) is the closing track on the soundtrack album.

A new 30th Anniversary two-CD edition was issued in Japan at the end of November and what this reissue does very deftly, is to present the original album, alongside a second disc that includes all of the cues in the film soundtrack that were missing – a few were extremely low in the sound mix and so can be enjoyed fully for the first time here.

This bonus CD has been sequenced nicely so that it can be enjoyed from start to finish as an alternative soundtrack to the film. Highlights are the full length Last Regrets, previously only available on the B-side of the twelve-inch single of  Forbidden Colours, Free Time, a fascinating layered ambient piece reminiscent of Vangelis’ Blade Runner soundtrack or parts of Midnight Express by Giorgio Moroder, and the full-length extended version of Merry Christmas Mr Lawrence which can only otherwise be heard with dialogue over in the final scene of the film.

Overall, the sound quality here is pristine, compared to the 1980s Japanese CD on London and a later Virgin Records UK pressing. The sound is much clearer – not loud – and a lot more detail is apparent. This is a cornucopia for ’80s synth geeks – the booklet names the systems used in English (most of the text is Japanese), and for those that haven’t heard it, the soundtrack falls somewhere between Japan’s Tin Drum (Ghosts makes a little cameo in sample form), and as mentioned previously, the work of Vangelis from the same era (Blade Runner and Chariots Of Fire). Many of the sounds are very ‘real’ – they could be played on obscure Balinese instruments – but at the same time they are clearly electronic, and in addition there are synthesised orchestral elements.

One change that is apparent is that on 23rd Psalm the organ plays from the beginning of the track, not fading in to the soldiers singing as on the original CD. This choice has been criticised by some Japanese fans, but to be truthful, it sounds really good, and it means that the ’80s CDs are not made redundant by this release!

The packaging of this edition is a gatefold mini-LP sleeve, with two booklets inside. The first booklet is a replica of the Japanese vinyl insert, including lyrics and credits in English. The second booklet includes background information, mostly in Japanese and a lot of photos, largely of Sakamoto, from the making of the film. Surprisingly, Bowie only appears once in the booklet, shown from the side, and other pictures seem to be cropped so he can not be seen. Like the alternate version of 23rd Psalm this seems like an odd decision. The other actors in this ensemble piece; Takeshi Kitano, Tom Conti and Jack Thompson are all well represented in the photographs. 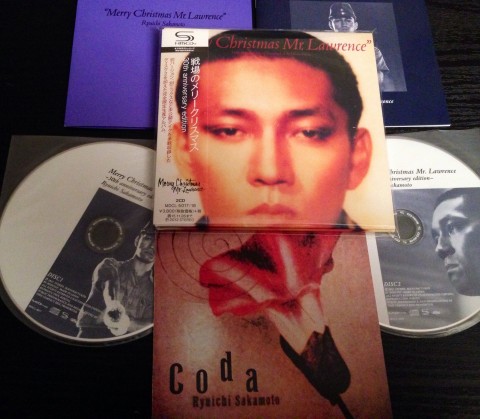 Coda was released in Japan only – initially on cassette and later on vinyl and CD – a couple of months after the original Merry Christmas Mr Lawrence OST. It consists of the whole soundtrack played by Sakamoto on piano, as well as two synth numbers Coda and Japan that are in the style of the original soundtrack and use many of the same sounds.

Coda is what it says on the tin, a relaxed soundscape you could imagine over the end credits of the film, somewhat muted, but very evocative of the source material. Japan is more upbeat, with piano, an undulating marimba sound and lots of Prophet 5 (classic analogue synth). It is Sakamoto’s tribute to his friends, the group Japan, and it could easily be one of their instrumental tracks.

Both albums are released on the SHM-CD (Super High Material CD) format. These both sound great, although I suspect this is down to careful mastering rather than the SHM format.

In summary, these releases come highly recommended. Merry Christmas Mr Lawrence has been sensitively remastered, supervised by the original personnel, including Seigen Ono and approved by Sakamoto himself, while the bonus disc and Coda offer something new to most listeners. The packaging is the usual high standard you expect from the Japanese, and the only ‘fault’ I can find is that alternate mix of 23rd Psalm, which for collectors is really rather pleasing.