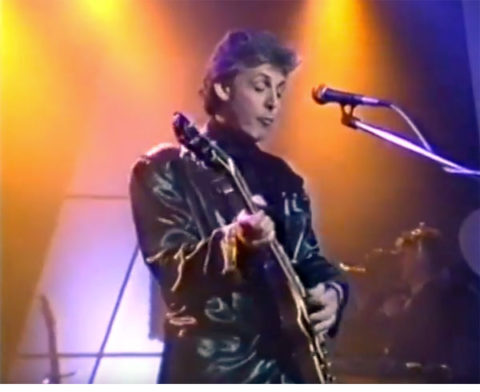 In November 1987, Paul McCartney was promoting his new UK single Once Upon A Long Ago and a fresh greatest hits All The Best! This resulted in a very interesting, and quite unusual appearance on UK television. Macca turned up on Jonathan Ross’s The Last Resort chat show and didn’t perform the new single, but rather entertained the British TV audience with a few rock ‘n’ roll numbers and an old Beatles track.

Why did Paul do this? Well, the Once Upon A Long Ago single (it was not issued in the USA and would be Paul’s last UK top ten single) featured new recordings of four rock ‘n’ roll standards across two 12-inch singles. These were:

These songs were the public’s first chance to hear tracks from what would become CHOBA B CCCP or ‘The Russian Album’ which was released the following year, in 1988. That was initially an 11-track record, so the two 12-inch singles (Don’t Get Around Much Anymore and Kansas City also appeared on the CD single) featured more than a third of the album. Paul recorded these songs live-in-the-studio over two days in July 1987.

Presumably, because ‘Once Upon A Long Ago’ is not really a ‘live’ song (indeed, Paul has never performed it live) Macca thought it would be fun to play of the oldies he’d recorded just four months earlier. On the show, he performs ‘I Don’t Get Around Much Anymore’, ‘I Saw Her Standing There’ and ‘Lawdy Miss Clawdy’. Note that Paul plays guitar throughout and not bass. This might possibly be the only time he’s never played bass live while performing I Saw Her Standing There.

The B-side to ‘Once Upon A Long Ago’ was the excellent ‘Back On My Feet,’ the first song co-written with Elvis Costello to be released (and infamously not included on CD as part of the Flowers in the Dirt reissue package). I mention this because the live band on The Last Resort includes half of The Attractions, with Steve Nieve on keyboards and Pete Thomas on drums.

Bear in mind that this was two years before Paul got back on the road for his Flowers in the Dirt world tour. Apart from ad-hoc events (Live Aid, Prince’s Trust) Paul didn’t really ‘do’ live in the 1980s and so this is a rare and very enjoyable TV appearance.

CHOBA B CCCP is one of four live albums being reissued on 12 July 2019. Details below.

Amoeba Gig 2LP vinyl (same tracks on the CD, except for Coming Up which is vinyl only)

Choba B CCCP vinyl (same tracks on the CD)

A1. Kansas City
A2. Twenty Flight Rock
A3. Lawdy, Miss Clawdy
A4. Bring It On Home To Me
A5. Lucille
A6. Don’t Get Around Much Anymore

Paul Is Live 2LP vinyl (same tracks on the CD)

A1. Drive My Car
A2. Let Me Roll It
A3. Looking For Changes
A4. Peace In The Neighbourhood
A5. All My Loving
A6. Robbie’s Bit (Thanks Chet)

B1. Good Rockin’ Tonight
B2. We Can Work It Out
B3. Hope Of Deliverance
B4. Michelle
B5. Biker Like An Icon
B6. Here, There And Everywhere
B7. My Love

B1. Maybe I’m Amazed
B2. Call Me Back Again
B3. Lady Madonna
B4. The Long And Winding Road
B5. Live And Let Die

D1. You Gave Me The Answer
D2. Magneto And Titanium Man
D3. Go Now
D4. My Love
D5. Listen To What The Man Said