30 Years Ago: ChangesBowie is released 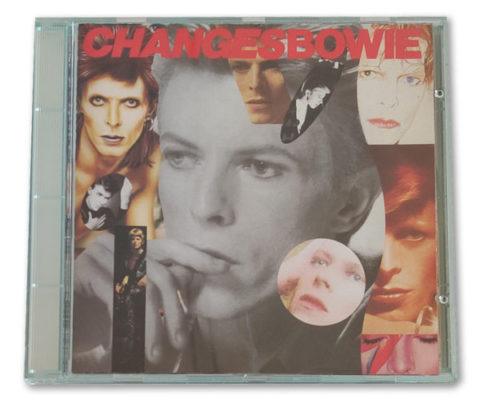 SDE looks back at the 1990 Bowie compilation

Rykodisc’s Sound + Vision box set may have officially kicked off David Bowie‘s reissue campaign in September 1989, but it was the CHANGESBOWIE compilation album and the ‘Fame ’90’ single that preceded it, that caught the eye and ear of the general public and served as a preface the album reissues and the world tour.

This would be the first compilation to mix David’s EMI output and the RCA years and it was issued on 2LP vinyl, cassette and CD (it later was issued on minidisc). The 21-track selection was cut down to 18 songs for the CD and while trying to fit a ‘best of Bowie’ onto one disc is everybody’s nightmare, the editing process was brutal and ended up removing some classics. ‘Starman’, ‘Sound and Vision’ and worst of all, ‘Life On Mars’ were all removed from the CD, meanwhile ‘John, I’m Only Dancing’ and ‘Suffragette City’ remained.

There was nothing from 1987’s Never Let Me Down album (it was probably too recent and to fresh in David’s memory to go back there) while 1984’s Tonight was represented by just ‘Blue Jean’ rather than the superior ‘Loving The Alien’, indicating that commerce and not art was what CHANGESBOWIE was all about. Or was it? Some of the decisions are curious. ‘Changes’ didn’t chart anywhere but the US and it still gets the nod, while ‘John, I’m Only Dancing’ wasn’t released in America at all and only got to number 12 in the UK but still supplants ‘Starman’ on the CD, a song which was issued in both countries and was a bigger hit in Britain (#10).

On the CD of CHANGESBOWIE one song represents the entire ‘Berlin Trilogy’. That song is ‘Heroes’, which peaked at number 24 in the UK. The number three hit ‘Sound and Vision’ isn’t on the compact disc (but does appear alongside ‘Heroes’ on the vinyl and cassette). So is this compilation about ‘hits’ or about recognition factor, or what David himself considered to be ‘representative’?

The inclusion of ‘Diamond Dogs’ always felt superfluous. It’s a great opener for a great album, but always felt like a plodder as a single and it unsurprisingly failed to break into the UK top 20 (and wasn’t issued at all in the US). ‘Rebel Rebel’ does a good enough job of representing the Diamond Dogs album and on reflection CHANGESBOWIE really does badly neglect the second half of the 1970s. The near five year gap between ‘Golden Years’ and ‘Ashes to Ashes’ is bridged by just ONE SONG on the CD version (‘Heroes’) and even on the cassette and vinyl LP it’s only two songs (with the addition of ‘Sound and Vision’). “But he didn’t have any hits during this era and this is a ‘greatest hits’ album,” I hear you cry. Well, for all the artiness of the ‘Berlin Trilogy’ those three albums still delivered five top 40 hits in the UK, two of which were top ten singles.

The lack of anything from Lodger (‘Boys Keep Swinging’ reached number seven in the UK chart, after all) seems particularly harsh. I mean, Low and Lodger both delivered top 10 singles in the UK something which Young Americans FAILED TO DO, but Young Americans gets both its singles on the CD while Low and Lodger are entirely ignored. What’s going on there? If CHANGESBOWIE is purely about ‘hits’ the title track of Young Americans does not deserve to be included ahead of ‘Boys Keep Swinging’ and ‘Sound and Vision’ (albeit the latter is on the tape/vinyl). 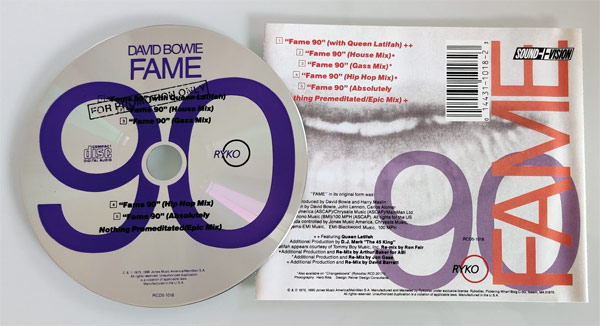 The US CD single of Fame 90 including a 14-minute remix not issued in the UK (click image to enlarge).

Of course, Bowie had selected ‘Fame’ as the song to be reissued as a single to promote the compilation (even though it had already topped the chart in America in 1975). This led to an entertaining four-track CD single in the UK, which I played to death at the time. It comes across as a bit dated now, I guess, but I loved the ‘House Mix’, ‘Hip Hop Mix’ and yes, even the Queen Latifah version of ‘Fame’. Best of all was the 14-minute ‘Absolutely Nothing Premeditated/Epic Mix’ which appeared on the US CD single. British fans were denied this variant and it still remains unreleased in the UK to this day (boo!).

Back to CHANGESBOWIE though. One of the challenges for Rykodisc was that the early part of the 1970s are full of Bowie ‘signature’ songs which weren’t necessarily big hits while songs like ‘Drive-In Saturday’ (which was a big hit) don’t necessarily have the same resonance with the general public. The latter wasn’t included on any version of CHANGESBOWIE despite only ‘Jean Genie’ being a bigger hit in the UK in the first half of the 1970s!

The collection is certainly an interesting attempt to pull together ‘the best’ of David Bowie as of 1990, but CHANGESBOWIE was in the end a bit of a mish-mash of actual hits and perceived ‘best of’ tracks. Rykodisc and Jeff Rougvie who managed this process would have been well aware of the compromises required and only three year’s later delivered, with the luxury of a two-CD set at their disposal, The Singles 1969 to 1993 – arguably the best ever David Bowie compilation.

CHANGEBOWIE entered this UK albums chart at number two this week 30 years ago. The following week it would hit number one and then remained in the UK top ten for four more weeks. What do you think of this compilation? Leave a comment.

129 responses to 30 Years Ago: ChangesBowie is released