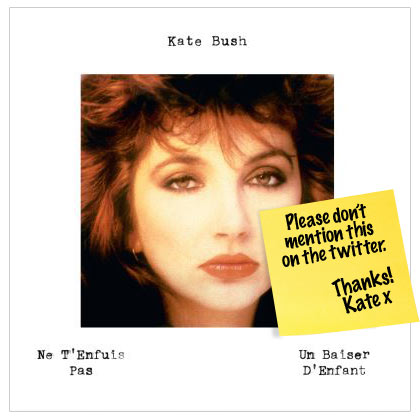 Too Much Information? Not from Kate Bush…

In 1993, way before the internet had entered people’s lives, Duran Duran sang of ‘Too Much Information’. The song (from ‘The Wedding Album’) was basically about the commercialisation of TV and mainstream media (“The pressure’s on the screen to sell you things that you don’t need”).

Twenty six years later and those days seem almost quaint compared to today. Now it really is a case of information overload, especially when it comes to new music releases and reissues. You have bands or artists in direct control of their Twitter, Facebook and Instagram feeds, then another layer of record company, PR and management promotion, plus every interview they do with any media outlet is promoted ad infinitum.

I guess because fewer and fewer people who like music are willing to actually buy physical product, every possible drop is squeezed from the marketing lemon, to give a ‘campaign’ some zip, until it is all but impossible for the consumer to NOT know about that seven-inch box set, or the ‘indies-only’ coloured vinyl, or whatever.

For fans, this removes the once treasured ‘surprise’ factor. The days when you walked into a record shop (remember those) and experienced the natural high of spotting something YOU DIDN’T KNOW EXISTED. These items would normally be some kind of limited edition… maybe a vinyl picture disc, a CD or cassette single, a ‘remix’ 12-inch issued to keep the song in the charts that bit longer. Not always though. It almost beggars belief but there were times when sometimes you didn’t know someone had a new album out. Imagine that! These days everything is communicated from the outset with such clarity and the messages are repeated so much, that it’s all but impossible for this to happen (assuming you have a computer or a mobile phone!).

Step forward Kate Bush. Now no one can accuse ‘our’ Kate of over marketing either herself or her releases. Martin Kemp and Shirley Holliman may have decided that news of their forthcoming album (‘The Swing Of It’) demanded a teaser campaign on twitter, followed by appearances on ITV’s ‘Lorraine’ and Zoe Ball’s Radio 2 show, but Kate is above all that crass promotion. You could argue she takes it to extremes, because she doesn’t even tell you when she has a new record out!

Recently, a special 12-inch version of Kate’s single ‘Ne T’Enfuis Pas’ was issued in France. Now this single was fairly obscure even when it was originally issued in 1983, having been issued only in France and Canada. The song (and its B-side) was included in the rarities discs in last year’s box sets, but Kate has clearly approved this special 2019 12-inch for the French market (one thing’s clear, nothing happens without Kate’s approval). But she hasn’t bothered telling anyone. Nothing on her twitter feed, nada on Facebook and zilch on Instagram. You have to laugh.

Of course SDE did tell you about this, but it seems both the record label and Kate thought they’d leave it to the exclusive French retailer FNAC to do the marketing grunt work. There were no announcements at all. It didn’t seem to occur to them that people outside France might be interested in this rarity.

Even when Kate does promote something, it’s done with all the enthusiasm of a teenager ‘helping’ to do the washing up. Early this year a 12-inch ‘Cloudbusting’ picture disc was released. This was available globally at specific retailers. Exciting, right? Here’s how the news was tweeted from Kate’s official account:

“12” Cloudbusting Picture Disc” [followed by link to her website]

Don’t get me wrong, I think it’s refreshing in some ways, but it’s rather amusing how uninterested Kate is in social media. Like your Grandad who does understand ‘the’ Facebook. You naturally assume that someone in Kate’s PR team handles all her social media posts, but they are so awful and inept that I’m not so sure. Has Kate really issued an instruction along the lines of “no fancy stuff, just stick to the facts”! Or “Under no circumstances should you retweet anything unless expressly authorised by me personally!” (there has been four retweets – and no replies to anything (!) – in the last nine years). How about “Please note, me releasing new product does not constitute permission to clog up my ‘socials’ and post about it!”.

In 2014, the year of Kate’s momentous ‘Before The Dawn’ concerts there was only seven tweets, in total. Martin Kemp has already tweeted 30 times in the last eight days about ‘The Swing of It’!

Of course, we wouldn’t change Kate for the world, and her lack of enthusiasm about this new release has given fans in French the fun of walking into their local FNAC and getting *that* hit of excitement, as they see a copy of ‘Ne T’Enfuis Pas’ on the shelves (a case of “What the FNAC…?”)

You can still pick up a copy from FNAC’s website but it looks as if you have to rely on ‘third party’ sellers, so the price is now slightly inflated. eBay is the other option, of course.

Talking of Kate, it would be remiss of me not to mention that the SDE ‘Before The Dawn’ booklet was released yesterday. Thanks to everyone who bought this – all the pre-orders have shipped, and some of you in the UK should now have your copies. These are now available for immediate shipping from the SDE shop. Helen Green’s artwork looks amazing and I’ve signed them, for my sins (I’m happy not to sign, if you prefer!)