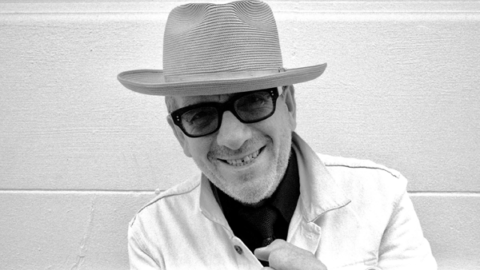 Elvis Costello will issue a vinyl-only super deluxe edition box set of his 1979 album Armed Forces in next month and has defended the lack of a CD version, saying that the compact disc “really is demonstrably inferior to vinyl, as a sonic storage system”.

The box set – which is only available via Costello’s store and Universal Music channels – contains nine pieces of vinyl: three 12-inch albums, including a remastered Armed Forces, three 10-inch records, including highlights from the notorious Riot at The Regent concert at Dominion Theatre on 24 December 1978 and three seven-inch singles. Costello says this release is “as much, if not more, than you’ll ever want to know about Armed Forces” and the box really highlights Barney Bubbles’ artwork and features seven custom notebooks containing updated liner notes from Costello and his handwritten lyrics from the era.

In an interview for Australia’s ABC Radio National, Costello, unprompted, addressed the issue of not putting out a CD version of this celebration of Armed Forces:

“I think that’s because, it seems to me, it’s been decided – for better or for worse – that that is a medium that’s seen its day and I can’t say I shed any tears about that. It was always an inferior compromise that involved not paying the artist properly, and really is demonstrably inferior to vinyl, as a sonic storage system, so it’s Armed Forces day now, it’s victory over CD. I a lot of people got rid of their record player – I told them not to do that. I think most people like the instantaneous access [offered by CD] but I know people like both, as well; they like the object to hold, the paraphernalia of records. Well, you don’t truthfully get that with a CD. All the artwork is cramped down into a horrible little booklet which gets ripped the second time you take it out of the plastic sleeve. This way, you can have either. You can have the instantaneous, portable version, that you carry with you [i.e. streaming/downloads] or you can have something beautiful… on vinyl, in cardboard.”

It’s worth noting that Costello is still issuing his latest album – the forthcoming Hey Clockface – on CD so fans are arguably being sent mixed messages and let’s not forget that while vinyl is undoubtedly in the ascendancy, and the popularity of the CD format is waining, in the UK last year 23.5m CDs were sold compared to 4.3m vinyl records (read this ‘format wars‘ article for more on that).

Of course, it’s unlikely that a CD box set of Armed Forces could retail for the £200+ being asked for the vinyl package, so there is that.

What are you thoughts on what Costello has to say? Leave a comment. The Armed Forces box set is released on 6 November 2020 and can be pre-order via The Sound of Vinyl, in coloured and black vinyl editions. It’s also available via the uDiscoverMusic store.

Side 2
1 Lipstick Vogue
2 Watching The Detectives
3 Big Boys
4 Pump It Up
5 You Belong To Me
6 (What’s So Funny ‘Bout) Peace, Love & Understanding?

Side 2
1 Alison
2 Lipstick Vogue
3 Watching The Detectives
4 You Belong To Me
5 Chemistry Class (Live at The Warner Theatre, Washington D.C.)

Side 2
1 Crawling To The U.S.A.
2 Big Boys (Alternate Version)
3 Green Shirt (Demo Version)
4 My Funny Valentine Riot At The Regent –

Side 1
1 Accidents Will Happen